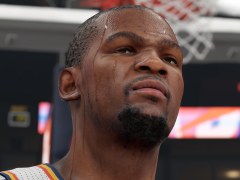 NBA 2K15 is here, and with it a bunch of small tweaks and improvements on both sides of the ball.

If you’re new to NBA 2K, or to basketball in general, learning how to play can be a daunting prospect. Knowing who to control and how to guard some of the league’s best players can be tricky, and can often feel like opponents are scoring at will.

VideoGamer has put together a bunch of tips and tricks to help you keep scoring to a minimum and learn how to match up against opposing players so that you become a dominant force in the paint.

In the coaching options, you can change who your players are supposed to be guarding. If your best player is guarding their least effective offensive player, change things around so the matchups better reflect your opponent’s strengths and weaknesses.

Make sure you pay attention to height, though, you don’t want a six-foot-nine power forward being guarded by a point guard who’s barely scraping six feet.

Also, you can change how exactly your team defends against each player on the court. Again, in the defensive settings, you can choose how tight your team marks a player, both on and off the ball, whether they automatically double team, how they attack in the post and more.

Don’t keep switching who you control

Unlike in other sports games, you don’t have to keep switching control to the man closest to the ball. The AI is very good at defending the ball-handler, and you can focus on picking up the other men on the court.

If you are particularly good at stealing possession, and want to control the man near the ball, don’t keep switching quickly, as you’ll be weak to a sudden dribble. Wait until an attacker catches the ball, then switch, once your defender is in position.

Don’t try to block all the time

Pressing triangle/Y will make a defender jump and try to block a shot. While doing so can be effective, it also carries a greater risk of fouling a shooter or being tricked by a fake shot and being left wanting as an opponent dribbles past you.

Be mindful of the situation before thinking about blocking: has the ball-handler just completed a dribble? How long is left on the shot clock? Who is holding the ball and where is he standing? These sort of questions will help you know how likely it is the player is about to shoot.

Moving the right stick up will make a defender put his hands up, which can be equally effective, especially as the taller players. It also means you won’t foul the shooter.

Don’t try to steal all the time

Stealing, while an incredibly important part of defence, also carries risks. Pressing steal (square/X) locks a defender into an animation, which if missed, allows the dribbler to run past and have a lane to attack the basket.

Again, it’s important to know your team’s roster, and stick to your best defensive players when it comes to steals. Chris Paul, Kyrie Irving and Rajon Rondo are very good at getting steals, as is often the case for smaller, quicker players.

Giving up offensive rebounds is a sure fire way to lose games. When a shot does go up, make sure you switch control to a big man, hold L2/LT to block your opponent’s big players from the basket and grab the rebound should the ball miss the basket.

‘Boxing out’ is a key to defending, and limiting rebounds is a major part of a big player’s defensive responsibilities. Stopping attackers from getting the ball means you won’t give up easy points, and also allows for your smaller players to nip in and grab some rebounds too.