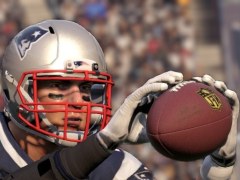 Madden NFL 16 has improved upon last year in making the game increasingly more accessible to new players. With simpler inputs to control both the quarterback and receivers, as well as more ways to throw and catch the ball, even experienced players can find new ways to sneak extra yardage out of every play.

For players new to the series, a game of American football can be pretty overwhelming. With audibles, linemen breathing down your neck and so many athletes moving at once, all demanding your attention. VideoGamer has put together a list of some quick tips to help you keep focused and hopefully, keep the ball in your possession all the way into the endzone.

Use a simple playcall scheme

There are three play call styles in Madden NFL 16: Enhanced, Quick and Slim. Quick is the easiest of the three, giving you just one suggested play at a time. Slim gives you three suggestions but in a smaller window. Use one of these when you first start playing to get on the field as quickly as possible, and also get an idea of each different play at your disposal.

When you see the play on the board, take a look at how the team lines up in each formation. How many running backs, wide receivers and linemen and also on which down each play is called will help you going forward. Knowing when to run or pass, and which variants of the two you opt for, is a fundamental part of the sport.

Eventually you’ll feel comfortable choosing plays yourself, but go with this for starters.

Play to your quarterback’s strengths

Each quarterback has a particular style of play that suits them. Some prefer to stay in the pocket, protected by their offensive linemen and throw passes. Others are quick and agile enough to go on a run themselves before throwing the ball. Some are great at throwing short distances, others long.

Once you pick a team you like, make sure that the quarterback suits how you play the game. Take a look at the QB stats so you can best decide which team to go with when you play.

VideoGamer has compiled the key stats of the top five quarterbacks in the game right here.

Keep an eye on the linebackers

Learning how to read defences is tough at first, but one way to tell whether or not your opponents are planning to run a blitz or give your QB some breathing room is by looking at the position of the linebackers.

The linebackers are the second line of defence, positioned just behind the defensive linemen. Their main responsibilities include tackling a running back that breaks the first line of defence, picking up any wide receivers in their area and making tackles on those trying to receive a pass, and of course, sacking the quarterback.

If these guys are pushing up to the line of scrimmage, there’s a good chance they are going to try and sack you, so you’re going to want to run a pass play that allows your quarterback to quickly release the ball, like quick slants or curls. If they’re miles away from the defensive line, then they’re anticipating a passing play and you’ll have more time to throw the ball, or it may be a good idea to try a run.

Use the formation map

When you press RT/R2, the camera will zoom further back and show you a map of the play you’re about to run. The red line shows the receiver the formation is intended for. This is the first person you should look to throw the ball to on the play, as they’re most likely to be open. Don’t worry about having to keep your eyes across the entire field all at once, start with this guy.

If this player can’t get free, then start looking at other options.

When in doubt, throw the ball away

Never, ever force a pass. A play with no gain is far more preferable to an interception. To throw the ball away, press the right stick. Turnovers cost games, so try your best to keep them to an absolute minimum.

Use the total control passing modifiers

In Madden NFL 16, there are now more ways to throw the ball to your receiver. Take a look at the total control pass modifiers below:

L2/LT – Throw the ball low. Use this when your receiver is in traffic. If he has defenders behind him, throwing the ball low minimises the chance of an interception while also giving you a good chance of gaining some yards.

L1/LB – Throw the ball high. Throwing the ball towards a player’s back shoulder is great if they’re on the outside of a defender. It’ll demand a great receiver in order to pull off some spectacular catches, but if there’s too much traffic to loft the ball, this is a good option to throw to the corners.

Tap pass button – Loft pass to receiver. If a player is running a streak play (running straight towards the end zone) and is only marked by one defender, throwing a lobbed pass is a good chance to try and help the receiver beat the defender in a foot race. It’s also commonly used in Hail Mary passes, where you are literally hoping for the pass to land in your player’s hands, rather than expecting it to.

Hold pass button – bullet pass. This is the more common pass, to get the ball quickly to the receiver. There needs to be a clear path from ball to receiver, otherwise a defender is likely to intercept or at the very least force an incomplete pass.

Double tap pass button – Touch pass to receiver. The touch pass works when a receiver is between two lines of defence. The ball should fly over the frontline and drop before the secondary can intercept. The receiver needs to be in space, though.

These modifiers can be used in conjunction with the left stick to further lead the receiver in the direction of where you want to place the pass. However, a natural tendency is to hold the left stick on every pass play, don’t do this as you can drag a receiver away from his route.

When it comes to receivers, there are three new catch types: Aggressive, possession and run after catch (RAC). Which one you use will depend on how much space your receiver has. If making a high catch in heavy traffic, use aggressive. In open space, go for RAC.