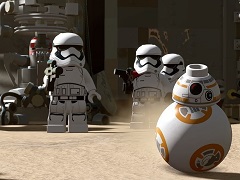 If you’re having trouble finding all the minikit canisters in the first Jakku level then you’re not alone, but this guide has them all laid out for you. Most of them can be found in the initial run through in story mode, but a few of them will require freeplay using characters with special abilities. Whatever the case is, we’ve got you covered here with where and how to find them all.

All minikits at the Village Retreat on Jakku in Lego Star Wars: The Force Awakens

Minikit 1. Around the Jakku village there are three recreational sports activities to complete. Next to where you spawn in is a mini bowling alley; destroy all the pins. Smash everything you see around to the left side and you can build a basketball net and a launcher to send BB-8 into it; round to the rightmost side of the map and you’ll find a football goal and some bits and pieces you can smash and build into a ball dispenser. Walk the ball into the net for a goal. Doing all three gets you the canister.

Minikit 2. Around the central area you can find three piles o’ stuff to smash and then rebuild into barrels for screaming people to hide in (one is roughly opposite the building where you first spawn in, one is near the bowling pins, and one opposite the raised building on the right side). Build all three to earn the canister.

Minikit 3. In the elevated ammo room that you have to muck about with a crane to get into, right by the window are the bricks to build a canister, so smash them and put them together again to get it.

All minikits at the First Order Assault on Jakku in Lego Star Wars: The Force Awakens

Minikit 4. Okay, your X-Wing has been destroyed and you’re making your way through the firefight. As you progress through the area, you’ll see a silver brick antenna tower every so often on the right hand side. Destroy all three of them for a canister. You’ll see the first one early on, then the second two a bit further to the end of the run, so it’s sort of an ongoing one, but they’re easy to spot.

Minikit 5. Once you’ve done the cover shooting segment and destroyed the troop ship and the stormtrooper gunner with a shield, you’ll be back to free roaming again. Hug the right hand side of the arena until you see a house in the distance with a stormtrooper shouting from the doorway (if you follow the level around to the left you’ll come to the citizens being threatened by troopers; reach them and you’ve gone too far). In front of you should be a small collection of pots and things which are partially on fire, and a stacked heap of bricks that kind of looks like firewood. Smash everything here to collect the canister.

Minikit 6. After BB-8 has pulled over the water tower to get you to the next area, get a character with force abilities. Whilst most of the water tower has been smashed, the actual barrel of it that held the water will still be there. Use force powers to pick it up and shake it around, and the bricks for a minikit canister will fall out.

Minikit 7. Move forward from here and find yourself blocked by a crashed troopship. Some stormtroopers will attack from behind. Deal with them, and then move back to where they came from. It’s another troopship! Smash the boxes and so on in the corner here and you can build a power conduit for BB-8. Power it up and open the door to the troopship; the canister is inside.

Minikit 8. Keep going and run into the flametrooper and his mates under a shield bubble. On the left hand side is a gold brick crate. You’ll need Captain Phasma, a flametrooper of your own, or a stormtrooper heavy to smash it open and get the minikit canister.

Minikit 9. Head over to the right side of this area, but near the front. There’s a pond that a swimming character like Admiral Ackbar can use to dive through and out of the sink in another house. Smash all the poor absent resident’s possessions and get the safe open. Out pops the canister.

Minikit 10. Back out in the fight arena, but still on the left hand side, you should see a pair of the yellow bars indicating you need a strong character like Chewie, or any of the giant monsters. It’s right by where the flametrooper and his mates are set up. Pull it open and go inside the building to get the final minikit canister.