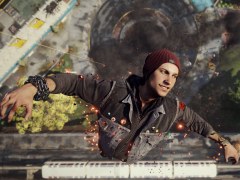 Climbing the Space Needle is a fairly simple matter; start by using the vent jump to get launched up the D.U.P banner. Scale this, then use the vent at the top to launch yourself around the tower to the next platform. From here you can get onto the central structure of the tower, and climb the ladder on the inside of one of the four corner struts. Next, jump across to the cable on the central pillar, and climb that as it winds around the Needle.

By now, you’re nearly at the top of the Needle. Jump up the next platforms until you are confronted by a large gap between you and the next platform. This might look like a difficult jump, but it’s best just to use the hover to get to the ladder leading up to the next platform, rather than trying to use the air smoke dash. If you do, you risk missing or bouncing off the wall that you’re aiming for. If you miss this jump, simply use the hover to float slowly down to one of the platforms below and make your way back up. Climb the next cable around the perimeter of the tower, until you get to a small platform with a smoke vent. Dash through this to get to the next area.

From here you emerge on a balcony that spans the circumference of the Space Needle. You’ll have to fight a few soldiers before you get to the next vent. It’s best to proceed slowly round the balcony and fight the soldiers a few at a time. This section isn’t too tough, but the D.U.P have set up barriers around the balcony for cover, so be aware you can cinder blast these to destroy them.

Once you get round the balcony to the next vent, smoke dash through it to trigger a cutscene and start the final section of the mission.

This fight is going to be a change of pace. Unlike previous battles, there is no high vantage point of relative safety to heal and refuel, so you’re going to have to keep moving to survive. There are chimneys to absorb smoke from, but they’re all relatively exposed. Don’t wait until you’re nearly dead before using a chimney to regain health. By this point you should have a few shards spare, so it’s a good idea to invest in the ‘quick drain’ power to make this a little easier.

The most important thing to note about the scenery of this fight is the rooftop vents. You’ll want to eliminate the clutch of soldiers on the raised central platform first, since they will consistently be able to shoot you from their position. The best way to do this is to first use a rooftop vent to propel you above them, then shoot down a cinder missile to clear them all at once.

Once you’ve taken out the ordinary soldiers in the centre, you’ll then need to deal with the rest of the soldiers before leaving the trenchcoat enemy you saw in the cutscene until the end. You’re always exposed during this battle, so the only way to do this will be to circle the outer perimeter, sneaking in a few hits when you can but never staying still for long. If you do, you can quickly get swarmed as the soldiers rotate, which is made worse by the fact that the elite soldier’s concrete powers cement your feet to the ground. If this happens, smoke dash away instead of waiting for the concrete to break.

When all the grunts are down, the elite soldier is easy. He’s pretty mobile, so if you’re having problems hitting him with your smoke shot, a cinder missile shot at the ground somewhere near his feet works too.

When the fight is over, drain the core relay to unlock the ‘orbital drop’ power, then subdue or execute the soldiers that spawn to charge your karma meter. Then use your new orbital drop to end the mission.