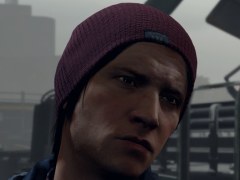 When you head to the objective marker, you’ll be told that you need to take down the Pioneer Square D.U.P Command Centre first. So let’s get started.

On the rooftops surrounding the command truck, there are two radar jammers, which prevent you from seeing anything on your mini-map within a certain area.

Start this battle from a rooftop to the south of the fogged area, and initiate the fight by taking out the closest jammer with a cinder missile. The jammer is the tower-like structure with a red-rimmed satellite dish, to the left of the neon ‘Hotel’ sign.

This will alert the soldiers to your presence, snipe a few of them from your rooftop across the street. Once more of the enemies move to your side of the compound, abandon your position and try to disengage with the enemy. Circle round to the east of the compound until you get a vantage point on the second jammer and take this one down with another missile.

Now that you have your mini-map back, the majority of this fight can be done hit-and-run style.

The truck is enclosed in a small area, meaning the guards will be fairly close together, so use missiles to take out a few of them at a time. There is another trenchcoat-wearing elite here, like you fought on the Space Needle. Remember you can use your smoke dash to move if he uses his concrete power to pin your feet to the ground.

Once you have cleared the area, proceed with dismantling the truck.

To get to the murder scene without being seen by the cops, head south of the circled area on your minimap. You should see a smoke vent, which allows you to get onto the rooftops unnoticed. You should now be able to head over the roofs to the scene of the crime without any trouble.

Once you have taken the pictures and sent them to your brother, use the nearby smoke vent to get back onto the roof. Head towards the next objective, but be careful that the D.U.P rooftop presence is much stronger now. You’ll want to stay on the edges of the area marked out as your objective, circling the roofs and taking out the enemies up here first. In this fight particularly, the normal soldiers have become much more mobile, and you’ll notice many of them using their concrete jump to get up to and between the rooftops. Bearing this in mind you’ll be less able to stay in one place, since the soldiers are better able to get to you now, so stay high and stay on the move.

You’ll notice several red and green lasers in this fight, soldiers in this area are pretty well equipped and you need to keep smoke dashing the rocket launchers and sniper rifles tracking you.

Once you have cleared the rooftops, you’ll need to deal with the soldiers on the ground. There are some elite soldiers here, including minigun-wielding elites like the one you fought in the Queen Anne command center. You need to eliminate all the D.U.P soldiers marked in white on your mini-map to continue.

Once you have done this jump down to the next murder scene.

After sending the pictures to your brother and finding the drug dealer’s stash (right by the bottom of the steps), a sniper on a far-off billboard will start targeting you with a purple neon beam. This causes damage, so zig-zag to stop her keeping the beam on you. There is a smoke vent across the alley from the drugs stash. Dash through this then head towards her. Since you’ll be covering a vast distance of open air, it’s worthwhile investing shards in ‘double air dash’ to make you faster and more evasive.

As you get closer she’ll initiate a chase sequence. After losing her (don’t worry, you’re meant to), you’ll need to go back and investigate her hideout and send more pictures to your brother.

Having done this, head over to the next objective marker. After a short conversation with your brother about the drug dealer’s guarding the entrance to the church, don’t immediately engage. Head to the roof of the church and begin shooting down. Once you have a eliminated a couple of enemies, use your comet drop to finish off the rest and get back to ground level. Smoke dash through the locked door of the church. Take a few more photos for your brother to end the mission.