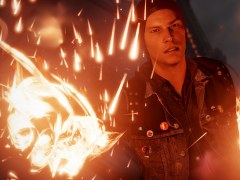 Whilst travelling between the three relays, make sure to avoid the newly flagged red zone on your map. This is a restricted area which you’re not yet ready to fight. Travelling through will alert a large number of soldiers and generally slow you down. Also note the security cameras around the perimeter of the compound which are marked on your mini-map. The range of these cameras is deceptively long, so give the whole area a wide berth.

The first relay you’ll want to hit is east of the compound you just assaulted. This one is trickier than the other two, since it’s located on a roof rather than at street level. Head to the objective marker and scale the building on its eastern side. When you get to the roof you should see the relay. There are only three soldiers guarding it, with an ammo box to the right, blow this up with your smoke shot to start the fight. There’s a chance you’ll take out one or two of the soldiers with the destruction of the ammo box, if not, simply pick them off and then destroy the relay to absorb its power.

You now have the comet drop, and are given an immediate opportunity to use it on some soldiers below. Get back to the roofs after taking them out with your new power. The next relay is to the south.

This relay is guarded by two soldiers in an alley. Get into position on the roof above the relay, being careful to approach from the north so that you don’t alert the soldiers. From the roof, use comet drop to take out the guards, then absorb the relay to gain cinder missile.

You’ll need to use this power right away on the trucks that pull up at the end of the alley, blocking the exit. Smoke dash through the vent behind the relay and head to the final objective, located next to the ferry terminal.

The advised approach to this one is similar. Get yourself on to the roof without being spotted by the D.U.P (as always, scale the opposite side of the building they’re next to) and head towards the objective. For a better angle, scale the back of the billboard on the roof.

There are also only two guards protecting this relay. Initiate the fight with your basic smoke shot, saving your cinder missiles for the additional three guards that arrive once the fight begins. Once you’ve killed all the soldiers from the roof, jump down and deal with the final relay, which grants you the sulphur bomb.