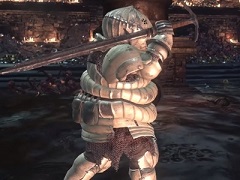 Siegward of Catarina is the Dark Souls 3 incarnation of the Onion Knight, also known affectionately as Onion Bro, who first appeared in Dark Souls as Siegmeyer of Catarina. The name references the armour, which strongly resembles an onion (and it’s fun to consider an armourer making the full set). You can run into Siegward several times in the game, and if you do it right, he’ll help you in the boss fight against the Yhorm the Giant, a Lord of Cinder.

Now that you have a brief overview of what’s to come let’s look at some of the highlights of Siegward’s questline in this popular game.

Finding Siegward of Catarina in the Undead Settlement

The first time you run into Siegward in Dark Soul III is at the Undead Settlement, at the tower with the giant at the top (you know, the giant hurling giant spears every which way but loose). You can get there by starting at the Cliff Underside bonfire, going out onto the roofs, and crossing the bridge over the chasm on your right. As you run into the tower, Siegward will come up in the lift and grumble about not knowing how to get up to the top of the tower when you speak to him. Then, after you figure out the trick lift (by getting on, immediately getting off, and waiting for the second platform to come down), you will, on the way back down on the lift, hear Siegward’s trademark “Hmmm…” about half way down. If you look to the side of the tower about where you hear this, you’ll see a platform that you can jump onto from the lift, though it takes some good timing because falling from that height will kill you.

From jumping onto this platform you can find Siegward sitting on a wall looking at a fire demon in a village square below you. You need to run down there like an idiot and initiate combat with the demon. Siegward will hop off the wall to come and help you because he’s a billboard sort of bloke. Once you kill the demon together, he’ll toast you and instantly fall asleep. You have to fight the demon with him for Siegward to turn up later in the game. Just chatting to him at the lift isn’t enough.

Finding Siegward of Catarina at the Cathedral of the Deep

Once you’ve opened the main doors at the Cathedral of the Deep you can go back to the Cleansing Chapel bonfire and look into the well beside the front doors of the chapel. You should get a dialogue prompt, and, low and behold, Siegward has got himself stuck in the well without any armour on.

Go back to Firelink Shrine and go up into the tower behind the shrine (if you haven’t already, you’ll need to buy the key to open it from the Shrine Handmaid). As you get on the lift to the very top, you’ll hear a door clanging. Go back to the bottom, and you’ll see you’ve been locked in by a man called Unbreakable Patches (and Unbreakable Patches is a dick). Once you get out, either by dropping from the bridge carefully, via the tombs sticking out of the wall, or just by dying, you can find Patches on the top level of the shrine. He’ll ask for forgiveness, and you should give it to him. He’ll then become a vendor, and you can buy Siegward’s armour from him. Of course, you can also kill him to loot the armour back, too, which is a much cheaper option.

Go back to the well at the Cathedral of the Deep and speak to Siegward to return his armour. Job done.

It’s worth noting that if you sent Greirat to loot things at Irithyll and Patches is still alive at this point. Patches will start pestering you for Greirat’s whereabouts. If you tell him, he will straight-up murder Greirat. Because Patches, as noted earlier, is a dick.

Finding Siegward of Catarina at Irithyll of the Boreal Valley

From the Distant Manor bonfire run out onto the lake and the right, into the small basement sewer area full of those long-haired insect spider things, and up into the kitchen of the house. Siegward will be sat by the fire at the end, and will have a little chat and another toast with you. You need to find him here before you go to the Irithyll Dungeon, or it’ll disrupt the questline with him and he won’t appear to help you fight Yhorm.

Finding Siegward of Catarina at the Profaned Capital

The next time you meet Siegward he’ll be locked in a cell, which is technically at the bottom of the Irithyll Dungeon, but you can only get to the door via the Profaned Capital. So to get Siegward out, you need to have first found the Old Cell Key in the Irithyll Dungeon, and then need to start at the Profaned Capital bonfire to find Siegward’s cell.

When you go to fight Yhorm the Giant a cutscene will play where Siegward arrives in the arena and calls Yhorm out. He’ll then help you in the fight, which is substantially easier if you have him along. After the fight, if you speak to him, he’ll reference Yhorm as his old friend. It’s a bit of a sad story, really. If you leave and return to the boss arena later, he’s left all his gear there for you—good old Onion Bro.

After Yhorn is slain, talk to Siegward one last time. Here you’ll see Siegward make his final toast before taking a nap.

Sigward is a non-player character (NPC) found in Dark Souls 3. He is a knight who wears his Catarina set as standard adorned with his trusty Pierce Shield and Storm Ruler to protect himself.

What is Estus soup?

This concoction acts as a healing station and can be found at various points within the game. Watch your HP heal instantly with a swig or two of this.

Siegbrau is a special brew designed for this game. It comes in a barrel mug and is ideal for those traveling. In terms of benefits, it restores HP and boosts frost resistance for 60 seconds.

What can I do with the Tower Key?

The Tower Key is an important item in Dark Souls 3. With this, you can gain access to the Bell Tower, as well as other vital areas such as those containing the Fire Keeper Set, Estus Ring, and the Covetous Silver Serpent Ring.

Is Dark Souls 3 a solo game?

The great thing about this game is that it can be either. You can quite easily play this game solo all day if you wanted to. But, if you did want to join others in play, just look for the player’s summon sign and stand on it. This will summon them into your world.