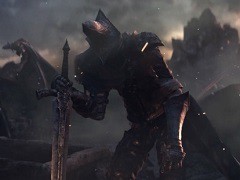 Dark Souls 3 Guide: How to Beat the Abyss Watchers Boss

We’ll be honest, we’re not really sure whether to say ‘him’ or ‘them’, because the Abyss Watchers’ soul passes from one body of the Undead Legion into the next constantly, and always fighting itself, but when you fight it it’s definitely in one body singular, so we’ll go with ‘him’ for now. This is your first official Lord of Cinder boss fight, too! Only three more to go after this one! And all the other bosses too, obviously.

This is a pretty easy run through, thank goodness. Start at the Keep Perimeter bonfire and hug the right hand side of the path, which allows you to avoid most of the enemies and get straight to the boss room, which is just up the hill, although if you want to summon help for the fight the NPC summon sign is back down the stairs a little way, which will probably mean pulling a bit of aggro. This boss will do fire damage in his second phase so prepare for that with whatever items you have that can boost your resistance to fire.

The Abyss Watchers are repped by one guy, as we said, who has a greatsword as well as a dagger, so the attack sweeps are wide but, in the first phase, are fairly easy to avoid. The kicker is that after a few seconds more soldiers from the Undead Legion corpses lying everywhere will start to resurrect, with the exact same moveset and damage as the main boss (this fight may start to feel familiar if you have already beaten the Crystal Sage). You’ll only get two of these guys alongside the boss at once, but the second one to resurrect will aggro and attack on everyone in the room (and it can be useful to have summoned an NPC or another player to help spread the aggro around a bit). Given these circumstances you have two choices.

Number one: do it like a proper honorable player and fight the boss without cheating. Dodge the attacks and try to take out the lesser soldiers, because they have lower health but will still deal damage and make it harder for you to get hits in on the actual boss. You’ll get points of entry after they do charged or smash attacks, and they all have relatively low poise and are weak to parries, if you can pull those off.

Number two: cheese it. Draw the third soldier into the others so they all start attacking one another because, crucially, the other legion soldiers will actually do damage to the boss. Run around the room repeating this process and occasionally darting in to get hits of your own, until the boss health bar is wiped and you can move on to the second phase.

After you’ve completely drained the health bar in the first phase the boss will drop as if he’s died, but you’ll then get an (unskippable) cutscene where the shared soul of the Abyss Watchers is finally, and fully, pooled into this fellow so he can get up to continue the fight, this time with his sword on fire. So we guess maybe it should have been ‘them’ up until now? We’re not sure. But the other bodies have definitely stopped resurrecting at this point, so that’s a bonus.

The new flaming aspects of the sword mean that the range at which its attacks will hurt has increased – it doesn’t actually have to hit you in order for the flames to still do damage. With larger charged, spinning, and ground smashing attacks the boss can now also shoot flames, for want of a better word. You can move in behind him fairly easily, but always remember that he likes to chain spinning attacks, but also that he can cover a big amount of ground in a relatively short amount of time. The key here is still good dodging and/or parrying, as the boss has high damage but relatively low defense himself.

Defeating the Abyss Watchers nets you your first Lord of Cinder, which you can deposit back on the throne at Firelink Shrine, and will open the way to the Catacombs of Carthus at the back of the boss arena. Congratulations, you’re making steady progress in the game!