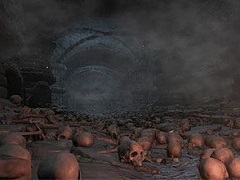 The Catacombs of Carthus aren’t actually that big, but given that every turn in them looks exactly the same you might find a guide actually helpful. This guide will help you find your way to the bonfires and boss fight, and grab some of the key items, but leaves most of the exploration up to you. As you might expect from the word ‘catacombs’ you’re going to experience a lot of skeletons.

There’s only one bonfire before the boss fight here, which can be a pain given that it’s a weird area to navigate and a lot of the enemies do high levels of damage. When you first enter the Catacombs from the Abyss Watchers bonfire you look out onto a massive great hole in the floor with a bridge on your left (which you should go down at some point, but we’ll get to that). Go right, along the edge, and you’ll find a ledge that you can drop down, then another, which will put you at the bottom of some stairs, which is where you needed to go anyway. Watch out, because a big living ball of skeletons is going to roll down the stairs, Indiana Jones style, and munch whatever gets in the way. Once the ball of skeletons has rolled back up out of the way, head on inside the passage. You’ll find it swings around to the left, and then right onto a walkway with a lot of pots on your right. There are a lot of skeleton enemies along this entire section, so be prepared for that. Head along past the pots to the end wall. There’s a broken section of walkway on your left which you can use to drop down to the next level, where you’ll be ankle deep in water (and also rats).

Assuming the wall is on your right, turn to your left so you’re looking down the length of the lower section with pillars down the middle, ignoring the other passageway next to you (which has skeletons stuck through wheels; if you reach the skeletons stuck through wheels you’ve gone down the wrong way). As you walk forwards there’s an archway with some stairs leading up, on your left. Run up these to a new passageway and the bonfire is about halfway along on the right, but watch out because there’s another rolling skeleton ball trap in this corridor. You can avoid it by hugging the little inlets in the wall.

Appears after you defeat the boss High Lord Wolnir.

Shortcuts at the Catacombs of Carthus in Dark Souls 3

Aside from the shortcut to drop down and run to the Catacombs of Carthus bonfire, there’s not much going on. No shortcuts. Only skeletons.

Key items at the Catacombs of Carthus in Dark Souls 3

The Grave Warden’s Ashes are another bit of Umbral Ash for the Shrine Handmaid. From the Catacombs of Carthus bonfire go left down the stairs and then a little left over to the opposite wall, to a doorway marked by candles which has a set of stairs leading up. Go up the stairs and immediately swing 180 degrees and go round behind the stairs to the end, then follow the passage right, then left, then run to the end of the room you’re in. There’s an item on the back wall.

In order to get to the boss, High Lord Wolnir, you need to leave the Catacombs of Carthus bonfire, turn left and go down the steps (being careful to outrun the rolling ball of skeletons) and left again, splashing through the water towards the red-eyed skeleton with two sickles, and swing a right at the end of that area (roughly where he was standing before you pulled aggro from him). You should now be in a natural rock tunnel leading down. Keep following this until you come out into a huge natural cavern with a wooden bridge suspended over it. You need to turn right and keep going up and around the outside of the cavern, and you’ll come to the start of this bridge. Don’t go over it. Look behind you and you can just see a path continuing up and around the side of the cavern. This will lead to a ledge overlooking the bridge.

You can now drop down and run up to the other side of the bridge, which is where we come to another Indiana Jones bit. If you attack the bridge it will fall, probably dropping a bunch of skeletons as it does. Once the fallen bridge has settled you can climb down it like a ladder, and run through an area with a fire demon to a new bonfire, and then out onto the Smouldering Lake, which has a bunch of optional bosses and items lying about. You can go the whole game without knowing it’s there.

You first meet Anri, and their companion Horace, at the Halfway Fortress bonfire on the Road of Sacrifices. Once you’ve defeated the Deacons of the Deep at the Cathedral of the Deep they’ll turn up again at Firelink Shrine, and mention going to the Catacombs is you speak to them there. If you want to follow Anri’s story, which can tie into one of the possible endings of the game in a pretty fucking creepy way (seriously FromSoft, what?), then you need to find them hanging about in the Catacombs.

From the Abyss Watchers bonfire head down and over the first bridge in the Catacombs, then right, towards the flight of stairs that go down into the main part of the Catacombs. Instead of going down them carry on around, eventually looping around to the right again. You can just see the platform that you come out on if you’re standing on the first bridge, over and away on the right with a couple of item orbs on it. Anri is in the corridor just before this platform, head in hands because they can’t find Horace. You can find them again on the ledge overlooking the broken wooden bridge to High Lord Wolnir, still unable to find Horace.

Horace is chilling out at the Smouldering Lake, in a little cave (follow the edge of the lake to the right and you’ll find the entrance) although he’s much more… aggressive… than usual. If you never find Horace, or don’t tell Anri about him, or kill him, you can find Anri again at Irithyll of the Boreal Valley.