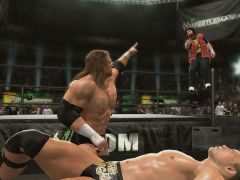 With 2K Games firmly established as license holder from the moment its entrance music sounds, next year’s WWE title needs to significantly reinvent a formula that is beginning to suffer from ring rust. Although a handful of subtle alterations improve this year’s action, the endless QTEs, repetitious commentary and reliance on wrestling archives must stop.

Instead, major changes prioritising the series’ long-term future need to be planned out. At the onset of the next-generation of consoles, it’s time WWE games make the transition from Hunter Hearst-Helmsley to Triple H. Robes need to be dropped, annoying gimmicks disregarded, and ultimately, chances need to be taken.

This starts with the overdue disregarding of WWE history. Fans have received plenty of opportunities to work through classic matches, replicate memorable moments and relive the company’s heritage in games such as WWE ’13, Legends of WrestleMania and many more.

Yuke’s’ 30 Years of WrestleMania mode is as close as the new title gets to a pre-determined story, but when you’re rewarded for imitating conclusions that are known to all, the sense of achievement is diminished. Completing basic objectives – such as body slamming an opponent when they are in critical condition or triggering an OMG Moment – is not enough to maintain interest.

Greater emphasis must be placed on WWE Universe, a game mode that has the power to overcome WWE 2K14’s niggles through the magic of multiplayer.

It barely matters that objects such as tables and ladders are hard to place when you’re joined by a screaming bud, nor does the camera’s occasional failure to keep up with the mayhem. The title is easiest to love when you’re playing through an ever-evolving storyline you have created together.

Managing, simulating and debating an endless schedule of bouts has the ability to appeal beyond those who regularly tune in to SmackDown! or RAW. With a little extra ambition, an already stellar mode could be turned into a seller of many units.

This can be achieved via the invention of WWE Universe Online. FIFA needs Ultimate Team. Football Manager needs online play. 2K’s WWE series needs a multiplayer component worthy of your time. Thriving sports (entertainment) games have one thing in common: they continue to satisfy large online communities. FUT is the best example of a mode that wants you to feel challenged, involved, and part of something more important than working through an endless run of forgettable single-player contests.

It’s a constantly updated, ever-evolving sports world that rewards all tiers of players for their input. EA Canada has created a simple yet addictive ecosystem of drama, personal battles and storylines that are more likely to be in the player’s head than on screen. WWE can create real stories in the same manner, but without need for regular microtransactions and luck.

WWE 2K14’s impressive customisation options continue to grow in this year’s release. Original Superstars and Divas can be designed right down to tiny details including tasteless tattoos, stupid hats and body deformations that scream something far more sinister than steroids. Most interestingly, you can finally tweak existing wrestlers to your taste, using them as a template for more inspirational concoctions.

Create-a-Championship lives up to its potential, joining entrances, arenas and storylines as aspects that can be fully tailored to your liking. While many of these aspects can be enjoyed in online multiplayer clashes, there’s never a sense that your world means anything beyond the confines of your home, not like, say, getting Cristiano Ronaldo in a Gold Pack on Ultimate Team.

This is where the potential of a WWE Universe Online mode comes in. Imagine opening your personally designed roster, schedule and arenas to the Internet. Image sharing your creations in a capacity that means something and provides you with a sense of history that far outshines what 30 Years of WrestleMania mode can conjure up.

When you’re offline, perhaps a random stranger can decide the outcome of an upcoming match on your schedule. When you return, notifications pop up and you have a developing thread to get excited about.

The possibilities here are endless. While working through any contest, it would be amazing if online players have the decision to randomly interrupt. A simple stipulation would allow unknown forces to create havoc, altering the results of your franchise and creating a sense that anything can happen at any time.

In return, you could hop into their originally created Universe and experience the output of another visionary. Imagine a WWE Universe where the Big Show’s giant frame has been reduced to a midget, or Kane’s mask is exchanged for pigtails and an entrance jig worthy of Brodus Clay’s appreciation. Once you hit that search button, who knows where you could end up.

Next-gen technology has the power to craft such an adventure. With online clips and video saves becoming easier to share, the most exciting creations would even have the ability to gather something of a following. One day, maybe a live showing of your virtual Pay-Per-View will be watched by thousands on Twitch.tv.

Perhaps like my hankering for WWE’s return to a pre-PG era, these thoughts should be locked away alongside endless spurts of blood and thumb tacks plastered in the juice of Mankind. Perhaps, however, somewhere out there, the new General Manager is listening.