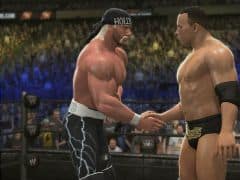 The Undertaker’s unbeaten streak is the only aspect of the WWE that still matters to me. The World Heavyweight Championship, Tag Team Titles, WWE Championship: they all pale in comparison to the Dead Man’s 21-0 record at WrestleMania.

Yuke’s has finally cottoned on to this, and in the developer’s first WWE game published by 2K Sports, it pays homage to the man who remains undefeated at professional wrestling’s premier event. Challenging “The Streak” pits you in a No-Holds Barred match against The Phenom, whose difficulty is stuck beyond the realms of Legendary.

This promotes the perfect opportunity to try out the 85-strong roster, or indeed, one of 100 created Superstars you now have space to play with. Progress against the man from Death Valley is charted via an online leaderboard, but if you wish to defend the boss’ streak, the slobberknocker formula of old is implemented.

In the ring, you can no longer spam running attacks to chip away at your opponent, as each wrestler’s agility is replicated with realistic shifts in momentum. Mark Henry takes longer to sprint, while Sin Cara bounces into his stride with noticeable athleticism.

Reversals are harder to time, and initiate attacking moves with greater regularity. This is most noticeable in multiplayer, as bouts no longer have a tendency to become instant stalemates. Sadly, the illusion of authenticity is broken when average-sized competitors have the power to slam behemoths: a perfect example of where alternate setting selections would suffice.

The Undertaker’s headline-grabbing performance is followed by 30 Years of WrestleMania mode. Similar to last year’s Attitude Era, it’s unfortunately a little bland as you blast through retellings of 46 memorable moments, triggering key events and mimicking bouts ranging from Hulk Hogan’s showdown with Andre Giant to John Cena and The Rock’s feud of recent times. Unfortunately, WWE Universe fails to receive a significant overhaul alongside this.

Subtle gameplay improvements might not be enough to attract casual players, but just like my affinity for seeing Mark Calaway’s tongue sticking out after a Tombstone Piledriver, WWE 2K14 is a well-rounded spectacle that serves up something for most wrestling fans.

A well-rounded spectacle that serves up something for most wrestling fans.
7 The Undertaker’s tribute mode is brilliant. Slight tweaks that improve gameplay. The potential of WWE Universe is yet to be realised. 30 Years of WrestleMania is a bland retelling of the past.