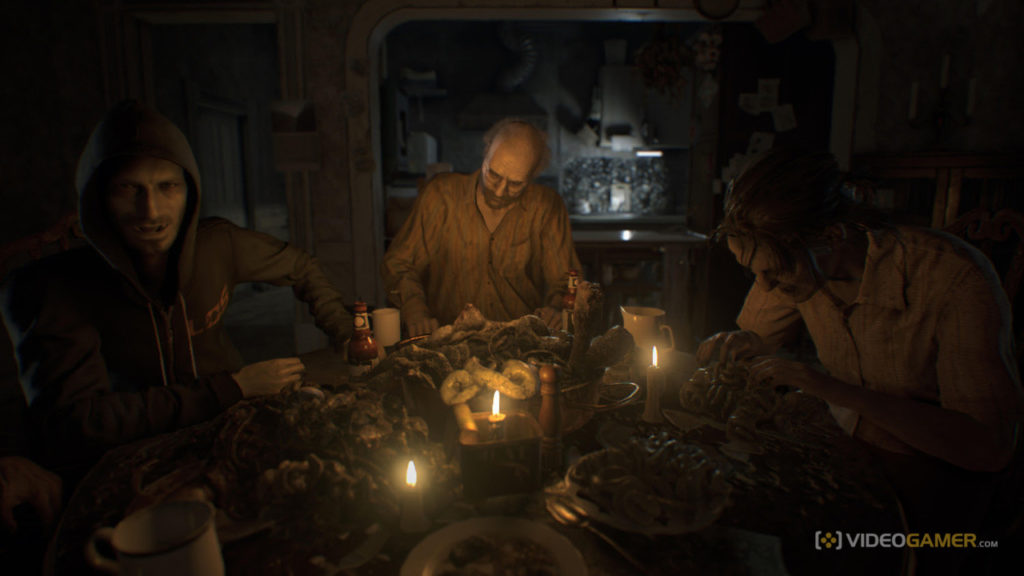 The newest Resident Evil 7 demo is called Lantern. It is called Lantern because you are chased around a dilapidated house by a woman holding a lantern, who alternates running and shrieking with creeping and muttering unsettling things. You can watch three members of the VideoGamer staff grappling with this experience here:

The information trickling out about the latest installment in Capcom’s celebrated series indicates the game’s protagonist, Ethan, ends up in the same house after going there after his missing wife Mia, but it’s Mia you play as in Lantern. This woman chasing you is Marguerite Baker, wife of Jack and mother of Lucas, who are, collectively, the Baker Family, antagonists for Resi 7 (though they may not be the only antagonists). The Bakers are my best-worst-favourite-least-favourite thing about any of the Resi 7 demos I’ve played. They could feasibly end up being the best thing in the whole game.

It’s kind of an old horror trope: Southern hick family in dubious living arrangements kidnap and torture young vibrant go-getters, with optional additions of heavily implied cannibalism, twisted interpretations of religion, and ‘You’re part of the family now!’ delusions. In one scene the protagonist is strapped into a chair at the dining table and force fed offal. It’s all very Texas Chainsaw Massacre. They even set a place at the table for nana, who very much appears to be dead but is still gamely involved in proceedings. The scene is a cross between Psycho and the condiments-on-the-table mundanity of an episode of Come Dine With Me: Ooh, the Bakers are serving ears for their starter, that’s a bit safe, they’ll have to cook those perfectly to get a good score.

Though they might not be entirely original, Resi 7 is playing on these themes very well. The Bakers and the house are very holistically designed. It’s an old plantation farmhouse in Louisiana. In one room there are stacks of old CRT TVs, which, after thinking about it, made total sense. The Bakers officially ‘disappeared’ in 2014 but they’re a throwback, they’re out of touch, and one of them probably had a vague idea that televisions are valuable. Many parts of the house are rotting and falling down, but there’s also a vase with flowers in, and other incongruously homely touches. Marguerite may be an unhinged murderer but she’s not an animal, for God’s sake — you can see flashes of this at the dinner, where she’s proud of the feast she’s laid on and upset that the protagonist won’t eat it. She probably answers the phone with “The Bay-cÅ“ur residence, the lady of the house speaking!” if she had an actual phone, and not just a direct and well maintained line to the part of her brain that wants to eat people, whilst also neatly bypassing the bit that reminds her she needs to shower.

Her son Luke is a sulky sullen teenager in a grown man’s body. He throws his food around and moans more in the “Oh my god, mooooooom, you don’t understand me!” sense than in the agonised one when his father cuts through part of his arm in a display of parental discipline. Jack, the aforementioned father, is more actively deranged than his wife, seen in trailers smashing through walls with a shovel and undeterred by being set on fire. As a group they’re trying very hard to maintain a family dynamic, just a really fucked up one. In Lantern Marguerite rambles on the topics of being all together, love, and going to your room like you’re a naughty child. Their motivation to catch you seems quite urgent, and the atmosphere becomes horribly tense, especially in VR.

Even though the full game isn’t entirely one of hide and seek, it’s obvious that evading the Bakers is going to be very hard. They know all the secret tunnels and doors in their home better than you ever could. In the yellow candlelight their grey skin and clothes take on a jaundiced look; they’re almost the same colour as the walls. You start getting the weird, paranoid feeling that they’re just extensions of the house; that in fact it knows where you are all the time and is reaching out to get you using the Bakers, who could spontaneously appear wherever it needs them. Yet they’re distinct from it, and each other, with different mannerisms and movements. Maybe they just need someone to obsessively love to complete the group, fill an empty bedroom in the house. Main course is intestines. They’re doing brains for pudding. Bit old fashioned that, hope Marguerite can find a way to do something different with it.