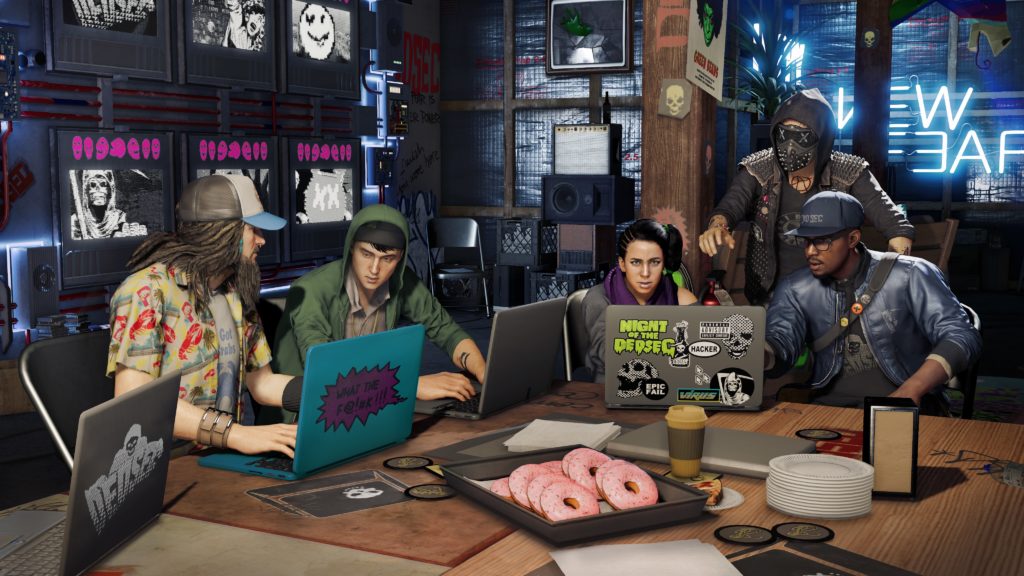 Watch Dogs 2, revenge of the nerds

When Ubisoft released the Watch Dogs 2 reveal trailer I spent a few moments considering it before deciding the new faces of DedSec were a bunch of wanks I was going to have no truck with. Further trailers cemented this feeling. There are a lot of jump cuts of them doing mad cool stuff like crashing cars and shooting guns and throwing a lit cigarette right down on the street. That bit where Marcus Holloway slides into cover under gunfire, and grabs a laptop to hack his way out of trouble. The earnest cool of it all. I felt like Ubisoft was sitting on a backwards turned chair going “Hey, aren’t these guys totally badass?” No, substitute English lit teacher, they are not.

My main concern going in to the hands on time I got with Watch Dogs 2 was that this attitude would permeate the whole game. That the ‘TAKE CTRL’ ‘Omg!’ ‘Lulz’ styling was going to be delivered earnestly. That I was going to have to spend hours in the company of what a middled aged focus group thought the kids with the hacking were like these days. After playing it I’m okay. I’m on board with The Return of DedSec. They’re not cold-as-ice badass hackers. Dedsec are a bunch of fuckin’ nerds, man.

When I say that I mean it as fully as possible. The trailer kind of implies their secret hideout is in a derelict building covered with graffiti. It’s not: it’s in the basement of a board game shop. A shop called Gary’s Games & Glory. A shop called Gary’s Games & Glory presumably as a nod to Gary Gygax, one of the creators of Dungeons & Dragons. The people inside talk to you about making good dice rolls with their paladin and painting miniatures. I’m not making this up. Here’s a picture of the inside:

The more time you spend with them the more fond of them you grow — even the one in the emoji mask. Unlike Aiden Pearce, who had the distinguishing traits of wearing a hat, DedSec 2.0 is a diverse group of young people (diverse in many different ways) who all feel disenfranchised by the system and actually have reason to be pissed off by it, rather than being on a vague revenge crusade which only started because they tried to rob a bank, Aiden. Marcus was unfairly profiled  as a criminal in the system. Josh was flagged for being ‘neuro-atypical’ and couldn’t get a decent job. Sitara is an artist infuriated at the gentrification of lower income areas (among other things). She loves old school pulp horror films.

Wrench, the aforementioned emoji-masked cosplay bait, is an almost entirely performative person, covered in tattoos and studded clothes, to the point that he’s replaced his face with the ASCII codes for expressions rather than doing actual expressions. He’s the one that likes explosions and fireworks and projecting DedSec logos onto buildings the most. When you scan people in the game you get a little readout of their name, their income, and something about them, but the DedSec hackers have changed theirs in the system. Wrench’s now reads as one of the most generic ‘your mom!’ jokes ever, and it makes total sense for him. He and Marcus like an over the top action movie series called Cyber Driver and they quote the lines together. Wrench is a lame-ass nerd and I love him now, despite feeling the visceral gut punch of hate the first time I saw him.

They can do amazing stuff, but are also mainstream uncool, and a lot of the brightly coloured DedSec imagery and attention grabbing stunts feel like members of the group trying to break out into actual cool. The trailers are the sort of thing they’d make themselves. If they were older it might occur to them that the ability to take control of a city’s infrastructure or turn any car you can see into your own giant RC toy is pretty cool in and of itself, but they’re not, and they grew up in a world with social media and internet points, so they want people to be impressed. Good thing too, because at least they’re enjoying the process. It’s better than being a human fun-vacuum, Aiden. It’s not that Ubisoft is trying to convince you they’re badass, they are themselves. Their den has neon letters on the wall that say ‘HAPPY NEW FEAR’, for God’s sake. The E is backwards. It’s very endearing.

It’ll be interesting seeing how the group develops over the course of the game. They could find a growing maturity, they could become even more ridiculous as the power goes to their heads, or it could suddenly all get too real for them. They’re young and angry and happen to have the skills to hit back, but in a wider sense they kind of don’t know what they’re doing. They’re also stupid board game geeks who like gifs. Good for them.