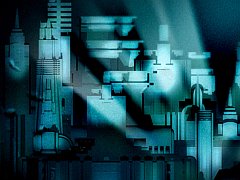 Inspired by our mammoth six-and-a-half hour adventure through BioShock 2’s underwater city Rapture, we proudly present the Top 10 Video Game Cities of all Time. It was a tough list to compile; we murdered darlings along the way, including San Andreas and Vice City from the Grand Theft Auto series, Stormwind and Ironforge from World of Warcraft, and Paradise City from Burnout. But the result, we hope you’ll agree, is a top 10 of unquestionable quality.

Okay, so this might be cheating slightly as the city you build here is different every time, but we reckon the cities created in Maxis’ classic sim are more involving than any other in this list. Sure, depending on who was in charge, the created cities varied from impeccably managed metropolises to rundown slums, but that is part of the charm. Your city was exactly that: yours. The Sims has made the genre somewhat more person focussed, but SimCity 2000 taught many of us the ins and outs of city management, and made the appearance of a building destroying monster quite heartbreaking. Damn you monster!

Those poor goron. Not only did they have to suffer living holed up in a cave near the top of Death Mountain, but they were starving. When elf-boy Link first arrives in Shigeru Miyamoto masterpiece Ocarina of Time, the entrance to Dodongo’s Cavern – the goron’s source of food – is sealed, the result of evil magic from big bad boss Ganandorf. Ganondorf won’t budge until the gorons give up the Goron Ruby. Where is it? Inside Dodongo itself. So it’s up to Link to enter the cavern, battle past its monsters and defeat the great Dodongo, thus returning the ruby to its rightful owners. The dungeon and the city were wonderfully designed, had memorable music (who can forget head goron Darunia dancing to Link’s ocarina playing?) and was home to, of course, the bomb-loving gorons themselves (perhaps Hyrule’s most adorable race). It might have been a while since we last explored Goron City, but we can remember it like it was yesterday.

Mass Effect’s city-sized space station wasn’t exactly teeming with life, and you weren’t able to explore that much of it, but it was so perfectly sci-fi that it was impossible not to marvel at it. Pristine, sanitised and mysterious, The Citadel was home to the Galactic Council and some memorable alien races, including the Eeyore-esque elcor and the vertically-challenged volus. Graphically, it was amazing. The Presidium, perhaps its most eye-catching area, had a synthetic feel to it; bright whites, cool blues and flying cars – complimented by an otherworldly soundtrack reminiscent of Blade Runner era Vangelis. But The Citadel had a secret, and it wasn’t until the end of the game, when the giant space station was buckling under the pressure of an epic space battle, that it was revealed.

Midgar wasn’t just one of the largest, most graphically impressive video game cities of its time, it was deep with meaning. It was a sprawling city controlled by an evil corporation and packed with “Mako” reactors, which had lead to widespread pollution and eternal darkness. It was also a city polarised: high above the surface the elite lived in luxury, but below, in the polluted slums, the poor struggled to survive. Midgar was Final Fantasy VII’s heart, its buildings, streets and houses its ventricles and its citizens its blood cells – the game began and ended there, and was the scene of Cloud Strife’s first meeting with flower-girl Aeris: one of the most iconic video game moments of all time. Massive, memorable and momentous, Midgar will forever be the Final Fantasy series’ greatest city.

We can’t recommend this place to tourists; from the second you arrive you’ll be harassed by fascist trans-human cops who’ll force you do all manner of things – including picking and disposing of rubbish that they themselves dropped. The alien Combine have installed a reproductive suppression field, so sex is literally impossible, and to make matters worse the whole place is politically unstable, thanks to the efforts of a certain theoretical physicist who’s gone “a bit Che Guevara”. Never mind, because City 17 looks stupendous. Six years on from the release of Half-Life 2, there are few games that can match its atmospheric mix of East European architecture and dystopian oppression.

The ruined city of LeÃ¡ Monde was as tragic as it was beautiful. Wracked by civil war and a devastating earthquake, LeÃ¡ Monde’s crumbling cathedrals, towering spires and labyrinthine “Undercity” were dour, depressing and beautiful. Clearly designed in the Western European architecture mould – particularly southwest France – the city proved the star of the show – a mean feat in a game packed with so many memorable characters. Unfortunately, though, LeÃ¡ Monde was a city few explored – Vagrant Story didn’t enjoy anything like the commercial success of Square’s Final Fantasy series.

Racoon City’s been through a lot, hasn’t it? It’s suffered a zombie outbreak, rioting, looting, complete nuclear destruction AND has the silliest name of all the cities on this list (stop sniggering, LeÃ¡ Monde). It’s all The Umbrella Corporation’s fault, of course. The evil virus-spreading company had loads of labs hidden underneath the city, most of which poor rookie cop Leon Kennedy and double-hard heroine Claire Redfield have struggled to put a stop to. The moral of the story? Never live in a city named after an animal famous for emitting a vomit-inducing odour… oh no, wait… that’s a skunk.

It takes an annoyingly long time to reach Rivet City, on your first visit at any rate, and to get there you’ll have to battle your way through the supermutants who occupy the ruins of downtown Washington. Still, it’s worth it when you get there and discover that the whole place is housed in the belly of an ancient ship. Fine, so it’s somewhat on the small side for a city, but if you explore its claustrophobic decks you’ll discover some of the very best quests to be found in Fallout 3 – including the excellent Blade Runner homage, The Replicated Man. And to properly solve this one, you’ll need to track down Rivet City’s very own urban legend – the elusive Mr Pinkerton.

Liberty City in Grand Theft Auto IV feels alive. Out of all the locations in the list, this is the one that makes you sit back and marvel at just how complete it feels. While the game engine GTA4 is built on is now starting to show its age, going back to Liberty City reveals just how ahead of the competition Rockstar Games was. The first time Niko steps outside his apartment, located underneath part of the city’s tram line, it’s impossible not to be taken aback. Cars are driven by NPCs, pedestrians wander the streets, cops scream up and down the roads, all getting on with their own business as you try to make something of yourself. Liberty City’s full of memorable locations, too, so before too long you’re driving about as if you really live there, bemoaning the sensible drivers that don’t want to run red lights.

Ah, Rapture. A city where the artist would not fear the censor. Where the scientist would not be bound by petty morality. Where giants in diving suits stomp about in the company of mutated little girls, beating up all the nutty consumers who’ve chosen to play doctor with their own genetic code. Rapture is a leaking masterpiece of art deco design, a city built upon the floor of the ocean itself, and as such it’s easily the coolest entry on this list. Of course, it’s also an extremely dangerous place, thanks largely to the insane governorship of its creator and ruler, Andrew Ryan. Yes, this is Ryan’s city – but with the sweat of your brow – and a copy of BioShock – Rapture can become your city as well.