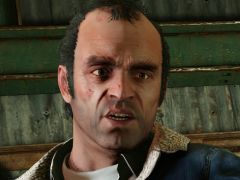 The real appeal of GTA 5 on PC

GTA 5 is out on PC today, but then you probably knew that, especially if your Windows username doesn’t comply with this list. (Sorry.) After a couple of delays – the second of which particularly stung – we’re finally going to be able to cruise around Los Santos in true Fuck-Off-O-Vision, at 60fps to boot, or whatever your setup can handle.

This is obviously a good thing, even if it will no doubt give ammunition to those terrible ‘PC Master Race’ bores, each of whom – if there was any justice – would be dispensed with like the chap at the end of this. Anyway, if there is a world that deserves being seen in the best possible fidelity, it’s Los Santos, and there appears to be the option to fiddle with everything up to and including the amount of trace cocaine found in Trevor’s piss. I’ll play through it on PC, despite having done so on both 360 and PlayStation 4, for the same reason that holidaymakers return to places they’ve visited before: I enjoy being there, even if ‘there’ is a land of wanton destruction where no reasonable person would ever want to live. So, just like LA.

If digital tourism is indeed A Thing, then Los Santos is surely one of the best places to ‘visit’. When GTA became a true phenomenon on PS2, imitators flooded the market, offering bigger, better, more. What they didn’t realise is that simply replicating the place wasn’t enough: you have to also replicate the feel of what it’s like to be there. Use the visuals (particularly the lighting) to build the mood, not just the geography. Which is why True Crime: Streets of LA, with its miles of empty freeway, felt like a tech demo, and San Andreas still feels like an actual place, albeit a caricatured version. The same is true for GTA 5, even when it was on 360. With yet more tools at its disposal Los Santos will evolve further, art design complementing technical edge, and vice-versa.

Early footage looks great, and the new video editor is going to get a serious workout. But let’s get down to the other reason that GTA 5 on PC appeals so much. Mods. Lovely, lovely mods. GTA 4 had what you could euphemistically call ‘a troubled launch’ (or was, quite simply, borked). It also didn’t look as good as people wanted it to. So, the PC community, as it often does, sorted that out.

The ICEnhancer series is (justifiably) the mod that is lauded the most, perhaps because it made a game that started off looking like this look like this. It’s a major feat, and undoubtedly one of the main draws for getting GTA 4 and its expansions on PC. But ICEnhancer, and its associated texture and weather packs, is just the start. Think of a car, or a gun, or (if you’re still 12 years old, or simply wish you were) a superhero, and someone will have modded it in. Iron Man is in there. So is the Incredible Hulk. Superman. Er, Kevin Spacey. Sites like GTA4-mods.com are stacked with them, adding not just increased fidelity or a chance to drive around in a real Ferrari instead of a fake one, but expanding the longevity of the game in other ways, such as with user created assassination missions, heists, and pretty much everything else you can think of. You can even be a cop, if you’re feeling particularly charitable.

It’s these seemingly smaller additions that excite me more than the massive graphical overhauls, or the (dementedly brilliant) mods where you play as a horse and drive-by people. It gives a reason to go back to a world you may have thought perhaps you’d already had enough of: stretching its capabilities, seeing just how far the game can be pushed. Even in GTA 4’s comparatively limited framework of Liberty City you could fly to the moon and fight aliens in a spacecraft. GTA 5’s canvas is far broader, and as such the Theoretical Nonsense Limit much, much higher. Many of GTA’s best moments are found by just dicking around, and the mod scene is great for this, combining the game’s mechanics with its more outlandish capacities.

There’s also the possibility, however small, that the community will fix or add elements to GTA that I personally found lacking. For a game all about money, I was still a little disappointed that its use was limited. Sure, Lester’s assassination missions had their share of intrigue, and you can buy planes and cars and golf courses, but after I had done all that I wanted to use it to buy more: houses, storage for my car collections, a swathe of Santa Monica, like Arnie apparently did before it was fashionable. GTA Online has a broader scope for this sort of thing, but I’d also like to see it incorporated into the single-player experience. And the modding scene may very well make sure that happens. Cheers.