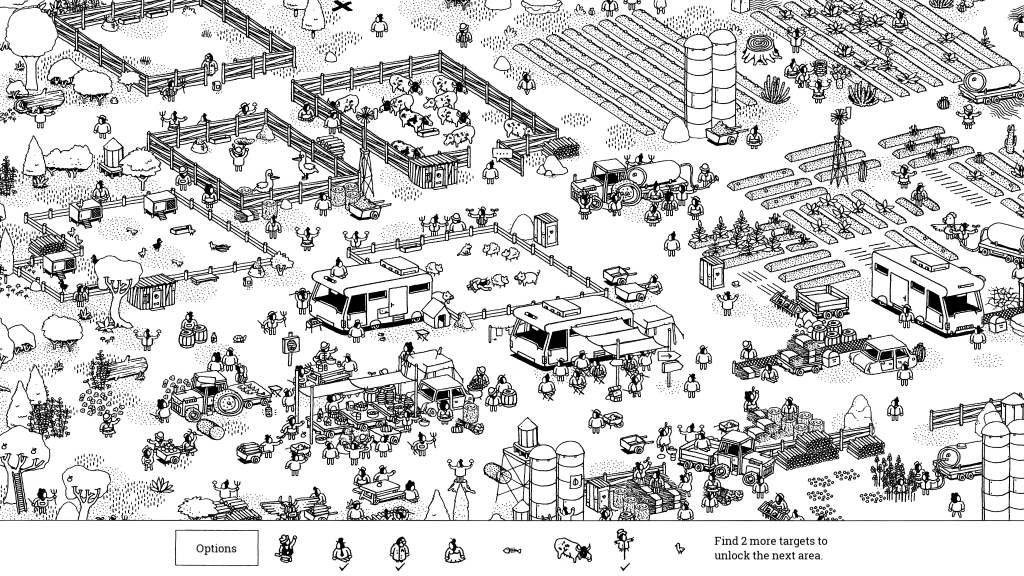 It’s time once again for your regular indie games showcase! This month we’ve only seen a few games to waft in your direction, and this showcase for February is appearing a bit further into March than one might expect. This is mostly because Nintendo did a thing. However, the games we do have for you this month are extremely varied, so there’s something for everyone!

Hidden Folks is kind of Where’s Wally for the commuter generation, but with lovely little interactions and absent that smug prick with his backpack and walking stick (there was a Hide and Seek Society at my university and they all wore red and white striped hats). It features detailed landscapes in black and white that you can zoom in and out of: a jungle; a desert; the suburbs; a city. In all of them there are little people going about their lives in different ways — attempting to get to the Burning Folks festival, hiding from their own birthday party, sleeping in a tree — and you are given a list of some of them, as well as some animals and inanimate objects, to find.

Each of these comes with a clue about where they are and what they might be doing (someone trying to catch bees, for example, is probably near the cluster of bees on the map). Some of these things can only be found by interacting with something else on the map, which can be as variously simple or complicated as removing a manhole cover or turning on some water and growing crops, but only in one specific field. The sounds are all made by a human mouth, as in: when you click on a tent the tent flap will roll up, accompanied by someone making a kind of ‘vip!’ noise and it’s actually rather lovely (and not, as writing it down here may unfortunately sound, slightly unsettling).

At any rate, Hidden Folks is very lovely and very calming, and I suspect will be enjoyed immensely by people who like those adult colouring books. It’s exactly the sort of thing that needs to exist in a world where you’re liable to come into contact with commenters from People On The Internet.

Stories Untold, from No Code, is a collection of four text adventures which I haven’t done a full review of yet because I haven’t finished them all (not because they take a long time, but because I got stuck on one puzzle for an entire weekend by reason of being an idiot, and then Zelda happened). But so far I can say that Stories Untold is very good, and very interesting, and much more than ‘Stranger Things: The Game’, as it is tempting to describe it.

They’re text adventures in that you have to input things onto a computer screen (which is on your screen) but the clues for what you have to do are often around said computer screen, on things like post it notes, or on the wall. They take place in different settings (a creepy house, a lab, what appears to be an arctic research facility) but have a through line of being weird and unsettling. So far the horror aspect has varied in levels from creepy to terrifying: the first episode, The House Abandon (which came out separately a while ago and has been remastered for Stories Untold) is pissed-your-pants-terrifying, and should definitely be played with headphones on even if you really don’t want to have headphones on.

It will make you look over your shoulder even though you know there can’t possibly be anything there.

We actually did a review of Forma.8, and found it to be good. Forma.8, by the way, is a small, spherical planetary probe that has become unfortunately lost, and must enter into a perilous journey deep underground of the alien planet it’s found itself on, that being full of perils and lava and buzzing things.

One of the best things is the art style, which is flat colour but manages to communicate depth of field cleverly using varying shades, and by bringing some things to the front so Forma.8 passes underneath them. The contrast between dark colour and bright colour — orange, blue, red, purple — is really lovely, and at times it feels like you’re floating through a 70s film poster, albeit a very aggressive one that’s trying to kill you.

Forma.8 is a roguelike, so you can double back on yourself and return to areas when you have new skills, to see if there are any new things to unlock. The enemies will respawn each time, but with each death you suffer you become wiser, craftier, and better at piloting Forma.8, the little probe that could. It’s enjoyably difficult and while people won’t lose their mind over it like they did for Ori and the Blind Forest, if you liked that then you’ll probably enjoy Forma.8 too.

Upon finding a jacket/wallet/phone that belongs to someone else, we normally have two choices: we try and track down the owner and give it back to them, or we swipe it for ourselves. A Normal Lost Phone explores the rarely mentioned third option. You’ve come across Sam’s pocket pride and joy, and rather than put your sim card into it, or bring it to the local police station, you decide to snoop around, read some text messages, and generally invade the privacy of the young man.

Granted, there wouldn’t be much of a game if, when you found Sam’s phone, you returned it to the authorities right-away, but I find it hard to believe that someone would try to decipher passcodes to apps on a phone belonging to someone else. If someone were to do that, they’re just an asshole; you’re meant to (and do) care about Sam’s struggles via well-written characters and realistic exchanges, but all the while, your lack of regard for Sam’s privacy grows. At some stages you’re even given the option to send images stored on the phone to people, as well as send drafts of messages that Sam has written out but not sent — some very sensitive stuff, as well. The story’s told through the interface of a smartphone, so I guess a bit of the aforementioned nosiness is to be expected, it just didn’t sit right with me at points because you’re simultaneously caring about Sam, while not giving a shit by rummaging through their phone.

The phone conceit isn’t a new one, but it’s also far from tired — this game works especially well on iOS, it must be said. Things like reading through text messages to see if Sam’s sent the wi-fi password to anyone in their contacts, so I can get online and check their emails is very smartly done. There are a minute number of instances where characters say something a little jarring, but that’s down to the fact that they’re true to life the rest of the time. Sam’s story is an important one, and another example of video games being able to tackle issues much larger than they have been before. I just think framing this particular narrative through the clever, yet flawed, smartphone interface mightn’t have been the best decision.