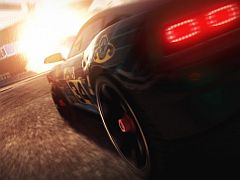 With Disney’s explosive arcade racer Split/Second Velocity due for release this Friday on Xbox 360, PS3 and PC, we’ve put together some HD 720p videos of the Xbox 360 game in action.

Getting ahead of the pack isn’t always the wisest idea – it places you top of everyone else’s hit list. Then again, taking out other drivers is tricky work – especially when you go colliding into their flaming wreckage.

Drifting, drafting and jumping all gain you the points needed to blow up other cars. Collect enough to get you into the red and you can drop an obstacle so big, chances are you’re going to hit it yourself.

Of course, instead of a giant dump truck you can just blow up whole chunks of the track, creating an entirely new route to screw up in.

High speed solo races make you the only target on the track. You know, for burning barrels, falling buildings, maybe the odd crash-landing Boeing 747.

In racing, it’s all about timing; timing your braking, your corners, and of course timing your power plays to explode on your enemies rather than yourself.

If you thought traffic was the bane of the open road, wait until you’re dodging guided missiles raining from above.

Do you like what you see? Is Split/Second the best looking arcade racer of all time? Let us know in the comments below