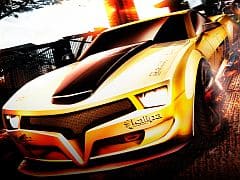 Fast cars and explosions are, for many people, a match made in heaven. Hollywood directors with cash to burn seem required to film at least one high-speed sequence on a busy motorway, complete with cars flipping out of control and crashing into each other. This essentially is Split/Second Velocity, although Black Rock Studio’s game adds out of control cruise liners, crashing airliners, collapsing towers and a whole lot more.

As far as racing games go, Split/Second is one of the simplest in recent memory. You take part in a series of events which make up episodes in a fake TV show. Success in these races, survival challenges, missile evasions and more results in credits, which unlock new vehicles. The goal in each episode is to unlock the final Elite race, with a podium finish here opening up another episode. There’s no car tweaking, no stat upgrades, no open world cities to drive around – just good old-fashioned racing. Oh, and all that explosive stuff I mentioned at the start.

Drifting your car, getting air time from ramps or drafting behind rivals fills a meter that enables you to pull off powerplays, Split/Second’s big gimmick. Each filled part of the meter lets you trigger one of the game’s many explosive track-on-car attacks, in which objects from the environment do their best to ram the race cars into oblivion. All you need to do is hit the powerplay button when you see a big icon appear above an opponent’s car, or better still above numerous cars. It’s not quite as easy as it sounds, as powerplays generally need to be well timed and activated when cars are on the correct side of the track, but they’re always destructive.

Even if you fail to take out a car completely, the shockwave will often throw them off their racing line, giving you the opportunity to overtake. Powerplays can even disrupt your car’s handling, or, rather embarrassingly, wipe you out if you time their use really badly. On top of this, if you fill the powerplay meter completely you can activate the really spectacular stuff, such as the aforementioned cruise ship that crashes and creates a new path, and an air traffic control tower which crumbles right in front of your eyes. It’s incredibly cool, with the new paths adding variety to what would be fairly standard multi-lap races, and impressively, doesn’t get old as quickly as you might think.

Car handling, in particular the drift system, makes for a game that is never as straightforward as it seems. In order to fill your powerplay meter you generally have to drift, but it’s easy to mess up and in turn slow you down too much. There’s a balance to find between going all out for the powerplays and just driving each track as well as possible. Powersliding feels very Project Gotham Racing to me, which is a good thing, although there’s certainly an argument to be made for a more corner-hugging model like what’s been used down the years in Ridge Racer.

What Split/Second really excels at is creating a constant sense of peril, meaning you’ve got to have your wits about you at all times. You can seem fine one second, but in reality are just feet from a complete wipe-out moments later. Last second swerves to avoid flaming trucks and swear-filled tirades aimed squarely at the “bloody game” will be common occurrences. Even Burnout, with its supreme crashes, can’t compete with Split/Second’s dynamically changing gameplay.

Sadly missing is the feeling of battling other drivers. While there’s the constant danger from powerplay attacks, there’s none of the bitter rivalry and brutal car-on-car violence seen in the Burnout series. If you could ram other cars for Takedowns as you can in Burnout it would have added another element to the gameplay and been fully in keeping with the action movie feel. Throw in more than eight cars on track and introduce boosting (an arcade racing staple) and you’d have an altogether more dynamic and exciting racing experience.

This isn’t to say that the game Black Rock Studio has delivered isn’t great fun. It is. It just feels like it’s lacking some features that could have turned it into a racing genre classic. Various event types, such as multiplier-based truck overtaking and attack chopper missile evasion add some variety to the more standard racing, but there’s no getting away from the fact that the package feels a little lightweight. The 12 episodes won’t take you long to work through, and there’s little reason to go back other than to earn victories on events you only scraped through previously.

Online play for up to eight, and split-screen for two, is a much needed time extender, although with only three game modes (standard racing, Elimination and Survival), your joy may be short-lived here too. There’s an added thrill gained from using powerplays on real opponents rather than AI racers, but it’s not something you’ll be playing endlessly for months on end.

One area in which Split/Second doesn’t need any work is its presentation. From the slick menus to the incredible in-game visuals the game Black Rock Studio has created is truly stunning. The sense of speed, as long as you can reach it before being pummelled by a crane, is unbelievable, the motion blur is superb, and the sheer spectacle of the powerplays is always thrilling. Lighting is top notch, the frame rate is more or less silky smooth and the soundtrack is so pumped you won’t need any Red Bull to keep you playing long into the night. Negatives are few and far between, but the crashes often look a little lame, paling in comparison to what we saw in Burnout Paradise.

Split/Second is so close to being great; so much so that in short bursts it really is a spectacular arcade racer. It just doesn’t have any legs. For some people this won’t be a problem at all, so if all you want is a stunningly produced, action packed rollercoaster of a racing game, look no further. It is ultimately disposable though, with little to keep you playing once you’ve seen the 12 episodes of content on offer. Extremely good fun while it lasts.

Split/Second is so close to being great; so much so that in short bursts it really is a spectacular arcade racer. It just doesn’t have any legs. Extremely good fun while it lasts.
7 Thrilling powerplays Glorious visuals Not enough cars on track Feels too simple