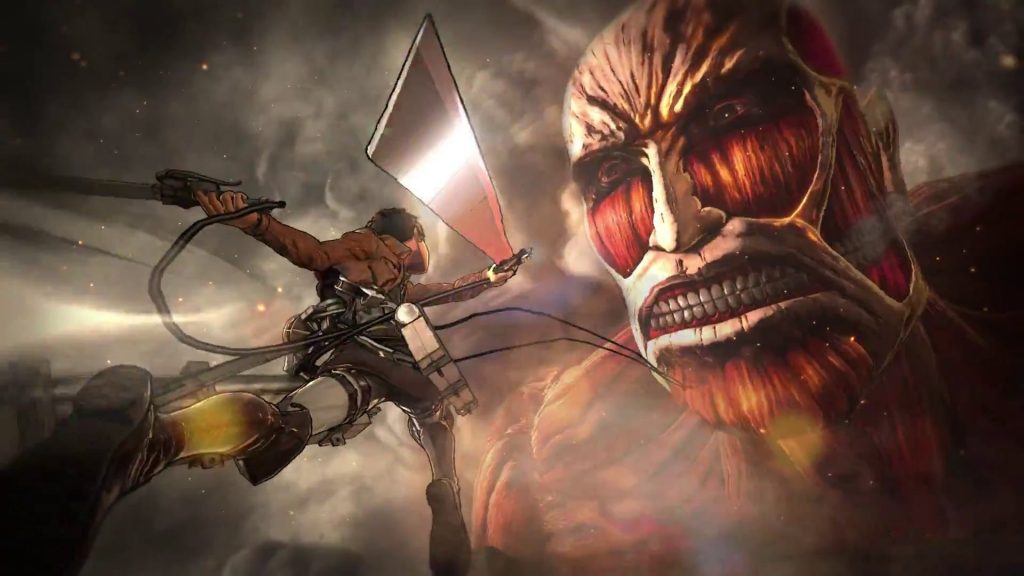 Is it just me or has the the term ‘Game of the Year’ lost a little bit of lustre lately? Simply snag a 75-or-above on Metacritic and there’s every chance you’ll earn said accolade, or at the very least a nomination. Hell, when it comes to naming one of those endless anthology collections, awards and noms may as well mean the same damn thing. No Man’s Sky: Super Hardened Game of the Year Director’s Cut Hype-Fulfilment Remix Edition, here we come.

In the spirit of further devaluing this once-hallowed honour I’m going to pick my game of the year on a completely subjective basis. Simply put —  which game, regardless of its shortcomings, gave me the greatest amount of enjoyment? Where was the fun in 2016? The answer to that question might surprise you, as this year I’ve opted for none other than Koei Tecmo’s Attack on Titan, or AOT: Wings of Freedom, as it’s known here in the west.

Now I should probably start by saying that I’m no great fan of the anime, nor of the genre in general. It’s all a bit rigid and cliche for my liking, though I will admit to enjoying Cowboy Bebop, Ghost in the Shell and the early portions of Death Note. The fact is that I didn’t pick AOT on the strength of its story, nor on its whinging, if occasionally likeable cast of characters. After all, how could I? I picked up the Japanese version while off on holiday, months before any English-language equivalent hit store shelves. It should therefore go without saying that I didn’t have a damn clue what was happening, and it didn’t matter a jot.

It didn’t matter for the sole reason that Wings of Freedom features one of the most breathlessly enjoyable central mechanics in recent gaming memory. This being a Japanese title, you’re tasked with piloting a gas-powered zipline into the necks of innumerable killer babies. The sort of stuff you’d imagine is all so terribly passe in Japan… It’s underpinned by the same mass-brawling mechanic made famous by the likes of Dynasty Warriors — a system that continues to feature in a truly staggering amount of eastern releases.

Anyhoo, the important thing to note is that these babies are evil, and massive — which means taking to the skies in order to surmount them. Imagine Spider-Man wearing a jetpack and armed with a cutlass, and you’ll have some idea of how this game plays. Swinging from tree to tower or baby to building remains a consistent delight throughout, with the accompanying sense of momentum providing a rush not experienced since Platinum’s Vanquish. As the game progresses and your speed and manoeuvrability increases, this addictive quality only increases, as you swing almost balletically into position. This is a game that quite literally teaches you the ropes and then makes you look like a bona fide megastar in using them. There were certainly ‘better’ games in 2016, but none quite so much fun as this.

As to my runners up, I did come close to naming DOOM my champion, and for many of the same reasons that I would eventually pick Attack on Titan. DOOM is a game that makes you feel powerful, but without ever sacrificing on fluidity or coddling the player. So often we see our heroes clamber aboard some elephantine mech in order to dish out extra punishment, but not here. Here the player is a whippet-fast tank from the prologue onwards, and only becomes more deadly as this generously-timed adventure develops. The lack of campaign co-op is a miss, as is the tacked-on multiplayer mode, but on the strength of its single-player alone DOOM 2016 remains a top quality title.

In third place for my affections comes Rise of the Tomb Raider: 25th Anniversary Edition. Yes, technically this is a 2015 title, but damnit I’m still going to pick it. Hurray for technicalities! Of course, there isn’t really a great deal that can be said here that wasn’t already written on its predecessor. Lara climbs, bludgeons and evades death with the best of them, and for my money continues to pip Uncharted to the title of best ‘Indiana Jones game’. That is a genre, right? Rise of the Tomb Raider is a game that just oozes assurance, quality and a remarkable attention to detail — rather like Lara herself.