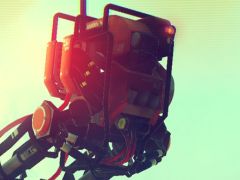 No Man’s Sky and the terrible power of hype

One of humanity’s greatest strengths is that it can, with not too much effort, normalise or at least tolerate even the most outrageous change in circumstances. Not only does it do this, it does it with such ruthless tenacity that it becomes difficult to remember exactly what things were like before. Remember the old Hollyoaks theme tune? Exactly. It’s in there somewhere, but you’ll die before you recall it, mentally taped over by the New Normal. Anyway, 2016 has been almost supernaturally laden with this sort of thing: everyone is dead, everything is fucked, everything is somehow going on. On occasion, however, you find yourself asking questions like ‘how did we manage to divorce europe?’; ‘how are David Bowie and Prince dead, while Mugabe still lives?’; and, perhaps more disturbingly, ‘how did No Man’s Sky become the most hyped game on the planet?

This is not a slight on No Man’s Sky. I haven’t played it, nor have I really seen that much of it. But every now and then I see some terrible non-controversy surrounding it – file sizes, delays, Sean Murray’s beard, LAN cables – and I try and think of a time when No Man’s Sky wasn’t being talked about in either hushed or heated tones, the saviour/destroyer of dreams. Like most of 2016, I’ve been asking myself how we got here.

‘Here’, of course, is the rabid, constant, and simultaneous lionisation and demonisation of a game (pretty much) nobody has played yet, a game made by a modestly-sized studio which nevertheless has captured the imagination of a lot of players. This is where the problem, inasmuch as having so much pre-release ardour can be construed as a problem, lies. Capturing the imagination of gamers is not an end point: as with most occupations, the locals are likely to start coming up with their own ideas on what could, and should, be done once that has happened. The results are often ugly.

This is the fate which has befallen No Man’s Sky, a galactic space-faring game with an aesthetic to match its ambition. Since its reveal, the promise of what it could do has been poured over ad nauseum by both its detractors and protectors, to the point – to paraphrase a certain beautiful rogue – that they aren’t considering what it should do. Grand dreams have been concocted, helped by claims of near-limitless planets and clever computing techniques, and when the reality of the situation is shown – no matter how thrilling it may be on its own terms – it cannot match up (or down, for this is the internet after all) to what we had all thought it may or may not be. It’s argued that hype as a word (and as a concept) has its genesis not in hyperbole but in hypodermic, an injection of excitement or euphoria. Like another kind of shot, any slight miscalculation at the firing stage tends to increase exponentially until you miss the target entirely.

No Man’s Sky’s mistake is that it simply took too long to arrive, trailed a few times but discussed endlessly with every appearance, already a victim of the hopes and dreams of its would-be players, but also of an audience which can’t help but default to comparative analysis, of bringing Elite into the conversation, of comparing the game that exists to the game in their heads. In a world of instant everything, where major albums are just dropped instantly and drones deliver toilet roll, talking up a video game three years before release seems almost quaint, particularly ones based on the concept of surprise, or discovery. Dean Devlin and Roland Emmerich discovered this with their year-long marketing blitz for 1998’s Godzilla, which hid the principal and promised the earth. By the time it arrived, someone else had delivered it.

Film and music and video games are very different forms, of course, but the people consuming them don’t change much. They want their version of something, and sometimes, if you’re lucky, you’ll get to give them your version before they have time to think up theirs. No Man’s Sky has no such luxury, and having announced in haste its players will vent at leisure, no matter how good it is.