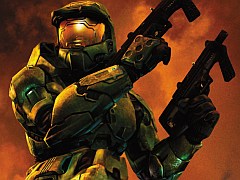 “Errrm, hey, guys?” crackled an unmistakable Western American accent through my Xbox headset – one of the 15 multinational dialects I’d soon be taking trash from in the post-game lobby. “Could y’all say what’s up to my ‘lil bro? He doesn’t believe this is real.”

It may seem daft in an age where ’20 million people are doing it’ on Modern Warfare 2, but weeks after launch in November 2004, that was exactly the response elicited by Halo 2’s staggering online multiplayer suite.

I remember the map and playlist like it was yesterday. Headlong, an embattled, New Mombasa building site that played host to some of the finest Single Flag CTF and One Bomb matches ever to grace Halo 2’s 16 person Big Team Battles.

The attacking team, spawning in a small warthog garage, would attempt to assault a daunting four-floor tower. The route on their left meant navigating a building rife with ambush points, made all the more dangerous by the energy sword lying within, which the enemy would almost certainly get to first. To their right lay a covered walkway and an exposed ramp, leading to a building adjoining the tower by a narrow walkway. Or they could always rush the tower in the ‘Hog and risk getting gunned down in open ground.

The first solider choosing the right path would more than likely opt to wield a sniper rifle under cover of active camo, but awaiting them would be an eagle-eyed adversary packing the Covenant’s own sharp-shooter, the bright pink plasma-powered Beam Rifle. Behind him (and let’s be frank, it invariably was a him) was the topmost entrance to the hallowed Flag or bomb plant point – patrolled by the insta-kill explosive power of a foe inevitably packing a rocket launcher. Not that you couldn’t take him out, mind – particularly with the help of a BR-toting teammate. Or three.

Yes, looking back, it’s easy to see the reason for the disbelief from my Texan pal’s wide-eyed sibling. Halo 2’s online multiplayer was a remarkable achievement; so far ahead of its time that even Bungie has struggled to match it. And now it’s gone; purged from Xbox LIVE due to necessary server changes. No doubt it’s a shift that will reap great rewards (that 100 friends limit is a pain, isn’t it?), but today is a time to take stock and reflect on the game that changed the service – and indeed, console shooters – forever.

Those first thrilling few months with Halo 2 online were all about discovery and experimentation especially for final year students with time to burn (which back then, included the staff of this very site).

There was something new every day: working out the best dual wield combinations; finding you could fly the Banshee up into the rafters to spawn snipe the enemy base on Waterworks; practising your timing for the new vehicle hijacks; discovering that you could throw the flag up through the sword spawn to a waiting teammate in Lockout; happening upon a level design quirk that let you contest a dropped flag by standing a floor beneath it on Ivory Tower; or perfecting your jumps to let you leap from Zanzibar’s sniper wall, across the broken pillars, all the way to the windmill’s access bridge, with a well-timed crouch landing – a handy trick which saved me personally from many a shotgun-shucking pursuer. You could even take three guests online with you on one Xbox, all enjoying unranked Social matches!

Sufficed to say, we were still finding new things, months after launch.

Easily the biggest draw, however, was a very simple ranking system, supported by the stat-mongering Bungie.net – which fed deeply into the sense of competition that’s at the root of any online shooter (although Tom was rubbish, even back then). Aligned with a whole host of different game variants from team-based to free-for alls and tense, exciting 1v1 encounters, this allowed Bungie to automatically match players with others of similar ability for what amounted to, more often than not, exceedingly close matches that lived long in the memory. For a genre that had previously always relied on generating lists of game rooms with gametype and ping fields, Halo 2’s matchmaking was a hassle-free, highly addictive, and above all a deeply-personal pick-up-and-play sensation.

It wasn’t perfect, however. As the servers became more crowded, the decision to hand the player with the strongest connection the host for online matches invariably led to significant latency between transatlantic foes. Put simply, in a 50/50 shotgun battle, the player with the fastest connection would often win out – even if they weren’t the quickest on the trigger.

Then there were the bugs not immediately apparent at launch. Of these, two stood out. The Superjump had a significant effect on in-game enjoyment on specific maps, where geometry clipping collided with a quirk of the physics engine to send players soaring high up the map and onto roofs of buildings they were never intended to access. The other major bug, meanwhile, affected rankings unfairly; objective matches which ended automatically gave the win to the red team. (I won’t dwell on hackers, or those who manipulated their connections by standbying or bridging their connection to gain an advantage – sufficed to say, the majority of us did our best to ignore them!)

Ever alert to community feedback, however, it wasn’t long before Bungie came out with fixes for the red team bug, plus a spot of weapon rebalancing to make grenades more effective and both melees and magnums less so. It was to be a few months, however, before we’d get the next major addition.

It came at the six month point, when many an online title has started to leak fans through over familiarity. The launch of not one, but two new map packs, was like a relaunch in itself, with everyone on my friends list back out in force to sample the new delights. Of course, they’d all ‘agreed’ beforehand that they’d only go for the free Bonus Map Pack, featuring snow-covered Big Team stunner Containment and Warlock, a rework of Halo 1’s Wizard. That is, until everyone (myself included) inevitably caved at the promise of the Killtacular Pack’s twin triumphs; the symmetrical flag fave Sanctuary, and in particular the stellar Earth city warfare of the asymmetrical Turf, with its snipe-happy open streets and ambush-tastic hidden ledges.

After that huge success, Bungie followed up in May with another, more ambitious paid-for map launch with the aptly-titled Maptacular Pack, and compiled all nine new maps into a retail disc entitled the Halo 2 Multiplayer Map pack, allowing users without Xbox Live to get their System Link ruck on, old-skool Halo 1 style – just in time for the summer LAN Party season.

By this time of course Bungie was well into developing Halo 3 for the 360; but even with the new console’s launch on the horizon, they still had one parting gift for Halo 2 players. In June 2007 shortly after the Halo 3 beta, the Blastacular Map Pack exploded onto Halo 2 for a small sum, giving original Halo nuts the level they’d all been clamouring for: Combat Evolved’s famous Hang ‘Em High, re-skinned as Tombstone, along with Desolation, a rework of Halo 1’s Derelict.

It was testament to the quality of Halo 2 that the launch of the Xbox 360 didn’t spell the end of its popularity. With the game little over a year old when Microsoft’s high def baby emerged, Gears of War still a year off, Perfect Dark underwhelming FPS fans, and Halo 3 not landing proper until Autumn 2007, the Master Chief’s inaugural online foray flew the flag for quite a time, paving the way for the Call of Dutys of the world and the online FPS battleground as it stands today. Microsoft’s marketing for Bungie’s bullet binge-fest had promised us that earth would never be the same – and in the online stakes, they were bang on target.

It’s with a sad heart then that we mark the passing of Halo 2’s online play into video game folklore – but also with hope and optimism that we look forward to the dawn of a new era with Halo: Reach; jetpacks n all.

Watch out CoD; a new team of Spartans are coming to finish the fight and retake their crown.

Can I get an Oorah?