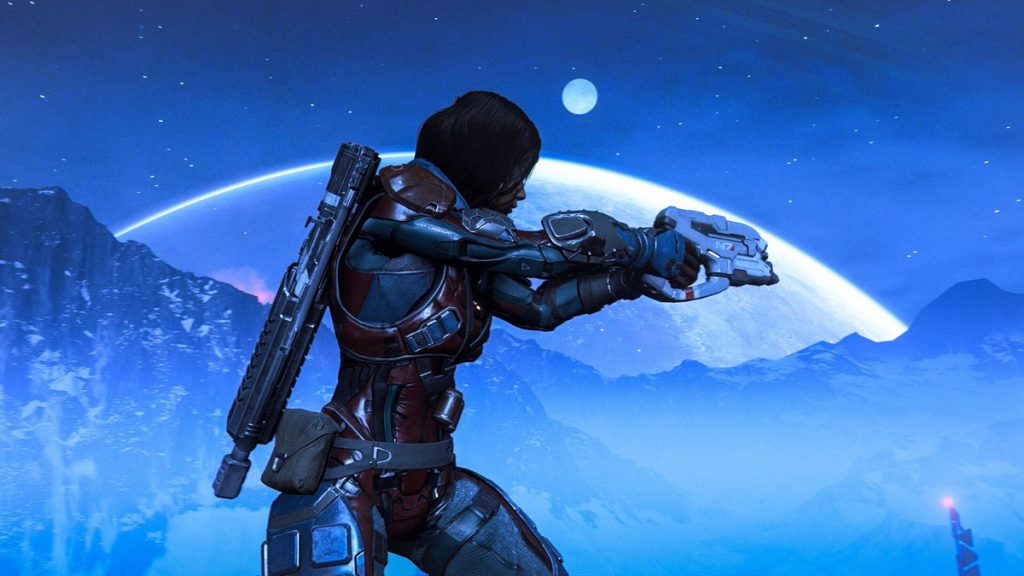 I’m an avowed fan of both Mass Effect and Dragon Age, but the two have always been very distinct for me. Dragon Age is your trad RPG, all dungeons and magic and elves, oh my!, eldritch horrors, turn based combat, and romanticising the discomfort of shagging in a castle that has neither central heating nor window panes. Mass Effect is a space shooter that appreciates a few RPG elements, but mostly solves problems by shooting them, and romanticises the awkwardness of shagging in a spaceship whilst an AI tracks all your activities. Despite some crossover between the two, they’re also different enough that there are separate fan bases for each (our own Colm Ahern has never played a Dragon Age, for example, but loves Mass Effect).

A while ago I wrote a wishlist for Andromeda that referenced how I didn’t want it to give up it’s third-person shooter roots and become Dragon Age: Inquisition in space, but, uh, that’s basically exactly what has happened. I’m surprisingly okay with it.

That’s not to say that in MEA you can hit pause and manoeuvre Ryder & Friends (breakfast cereal and morning cartoon forthcoming) around a battle area from a top down perspective, using turn based combat to make the fights inexplicably polite as everyone waits for the enemy to be done stabbing them. The combat in Andromeda is quite possibly the best it’s been in the series. It’s constantly moving, and fast paced, with memorable set pieces where enemies can unexpectedly surround you. Firing off Biotic space-magic or hurling grenades whilst in mid-air, finally routing a pocket of loofah-faced galactic-dickbags the Kett, feels like authentic, down to the wire, space marine heroism.

You find Inquisition elsewhere, principally in the open world exploration spaces. There are a couple of cities and half a dozen-ish planet-side maps to explore and potentially whack a colony outpost on top of (people better versed in the history of colonialism than I am will, I’m sure, have interesting perspectives on that aspect of Andromeda; for reference there’s only one intelligent species native to the system you explore, and you can’t colonise any of their sovereign planets). There’s a glow-in-the-dark purple jungle planet, a blue-white ice planet, a scorching desert one, and so forth. The Frostbite engine has done right by the environments if not the human faces, the animations on which have been mocked extensively — the aliens, by comparison, seem to have had a lot of love. The Salarians and Krogan in particular look great.  So, you run around solving problems for everyone you meet in these places, encountering pockets of enemies. Occasionally one of your mates invites you on a picnic to a certain planet, or you find an uncharted cave.

Andromeda has also upped RPG elements like crafting, which, if you really drill down into it, you can spend hours on. You earn research points by observing unfamiliar tech, flora and fauna with your scanner, use these points to research blueprints, and then build items from the blueprints with resources you’ve also picked up on your travels. Some of them have slots for adding upgrades (which can also be researched). It’s absurdly similar to Inquisition, just for spacesuits instead of suspiciously tight leather.

The writing puts me more in mind of Dragon Age as well. It’s definitely not going to be to everyone’s tastes, but Mass Effect: Andromeda leans away from seriousness and heavily into Hollywood bombast. It’s a story where a literal galaxy is on the line, so turning the dialogue up to the proverbial eleven didn’t jarr to me. Though it doesn’t always land, the tone is helped immensely by the strength of the voice actors for Sara and Scott Ryder (Fryda Wolff and Tom Taylorson respectively).

Then there’s Drack, the Krogan squadmate, who says both “Don’t get cocky, kid,” and “Time to take out the trash,” in the space of a single mission. On a space port full of thieves and murderers — a wretched hive of scum and villainy — you run into what is basically a version of Han Solo. There’s even a side mission to organise a movie night with the crew, where they watch a dramatic action film and end up skipping to the good bit — that being a planetary explosion.

You can see flashes of familiar Dragon Age characters every now and then: an Alistair here, a Sera there. It’s kind of like Purple Hawke, the sarcastic get-drunk-and-raise-hell version of the protagonist you could be in Dragon Age 2, has been allowed to direct an action movie set in space, which I am fine with. There are even references to Dragon Age to be found, if you look closely enough.

So, if what you liked most about Mass Effect was the tighter story pushed through with action set pieces then you might not enjoy Mass Effect: Andromeda, but if you liked Inquisition you’re probably fine. Though this in itself may be a problem for a Mass Effect game. Although maybe not as much as the widely reported tech issues.