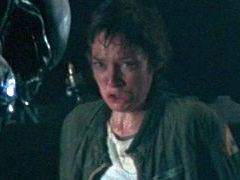 Lambert’s death, not Ripley’s survival, was the biggest challenge in Alien Isolation’s DLC

Alien: Isolation is a game with a reverence to its source material that borders on infatuation, and Creative Assembly’s recreation of the designs of HR Giger, Ron Cobb and Chris Foss are a huge part of its appeal. But, in taking on the fate of the crew of the Nostromo in the Crew Expendable DLC, CA found itself with a unique problem: it would have to interpret one of the most grisly, debated, and expertly implied movie deaths of all time: just exactly how did the Alien kill Lambert, and was it actually rape, as suggested in the film?

The exact manner of death of Veronica Cartwright’s Lambert character has been the subject of debate for 35 years now. Overriding consensus was that she’d died as a victim of sexual assault by the Alien’s tail, as in the film we see it slide up between her legs. (As many have noticed they’re actually Brett’s legs from a previous kill, spliced in here to add the suggestive element.) Ridley Scott himself, on the Alien Anthology commentary, states that while we didn’t know exactly how she dies, rape is alluded to. “Was that some dreadful ending? Was that some terrible invasion of her body, a rape?”

So CA had a call to make, as it had to depict the scene while sacrificing editorial control over where the camera was, the key element that enabled Ridley Scott to both escape the censor’s grasp and create its terrible implications. The development team’s answer was something just as violent as in the movie, which kept the interpretation that Lambert had in fact been raped by the Alien, but as explained by creative lead Alistair Hope, could never exactly be in line with the movie’s interpretation.

“We recreated what was in the movie, in the first instance, which is usually what we do. But it just felt too extreme, it felt too much. And the fact that we couldn’t really handle it in the same way the filmmakers managed [via editing techniques], it would unbalance, I think, the experience. And so we decided to go for something that was…the outcome is the same, she is killed by the Alien, it’s still kind of a horror death, but without the difficulties around trying to reproduce [what was on screen].

“Filmmakers have it easy, because they can control everything, absolutely every element of the experience. Not least the framing, and we don’t really have that luxury. [How to depict Lambert’s death] was something we talked a lot about here, and about how we were going to approach it. We’d already kind of detached ourselves a little bit from requiring the content to be a clone of the events of the movie…we were setting this up to be more of a what-if? scenario, and so that gave us a little bit of artistic licence.

“We did try some different things out, but we don’t have the control, so we thought, for the good of all the content, we took a step back.”