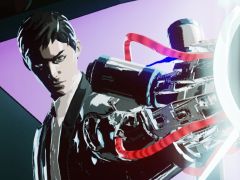 Killer Is Dead: Style over substance. But did you expect anything more?

Suda51 has been swotting up.

The esteemed game director – who regularly crams his titles with nods to popular culture – has sculpted Killer Is Dead around an array of Hollywood and literary references. That said, he doesn’t appear to be someone who wants to simply coast on the back of somebody else’s work. Suda contorts an array of memorable ideas to fit his purpose. He wants to make original, eclectic and thought-provoking games without needing to worry whether or not mainstream buyers favour products that is increasingly brown and COD-y.

Suda51 is an artist, and like many before him, the Japanese designer looks at the surrounding world for inspiration. But although his array of visually striking games are admirable in their intention to be different, here the constant need to be creative has fractured Killer is Dead’s story mode into a series of vaguely interlinked mercenary jaunts across the globe. It presents a random combination of undeveloped mini-sketches and never promotes a comprehensive whole.

Let’s rewind back to 2011 for a moment, and the release of Shadows of the Damned, Suda’s collaboration with Shinji Mikami. The aforementioned horror-comedy bridged genres seamlessly, developed memorable characters and served up a well-balanced corridor shooter that was certainly worth your time.

It had its problems, like most Suda games, but it incorporated its influences into the game in a far more complete way than Killer Is Dead’s cursory, superficial nods and winks. Most interestingly, it utilised the basic structure of Dante’s Inferno to highlight a modern day hunt for the proverbial Beatrice. While the Italian poet’s story has been retold and repackaged thousands of times since the 14th century, Suda51’s spin depicted a Mexican demon hunter whose only option for redemption was a rock n’ roll enthused step into Hell. Garcia Hotspur wore a leather jacket, was covered in tattoos, and controlled a transforming skeleton gun by the name of Johnson.

It was this relationship that strengthened Shadows of the Damned’s unimaginative gameplay. The title shares huge similarities with Killer Is Dead, but manages to transform uninspiring structural design into something far more interesting. Johnson’s humour and Garcia’s deadpan reaction told the narrative in a manner that successfully managed to combine laugh-out-loud moments with an impending sense of doom.

Killer Is Dead fails to establish this kind of tone. Mondo Zappa, the game’s protagonist, succumbs to a universe of spot-me references that span the breadth of cinema and classic literature, but never go deeper. His hyper-stylised appearance is almost too slick and shiny to carry personality, and the game relies on the aforementioned influences to hold the attention of players.

Mondo is a man of few words and echoes The Bride’s calculated quest for justice in Kill Bill. With each chapter presented to a blood-soaked title such as ‘The Woman of Pain’ and ‘The Man Who Stole Her Ears’, it wouldn’t surprise to see Quentin Tarantino’s name rolling in the credits. Mondo’s slick swordplay regularly turns the screen black and white, mimicking Kill Bill Vol. 1’s House of Leaves scene, but it’s all show, and not as clever or useful as having a skull-based Virgil lead you through library-based Circles of Hell like in Shadows of the Damned.

Underneath his glossy James Bond exterior, Mondo – and Suda himself – is coaxed into the ‘style over substance’ trap. His cheesy one-liners include humdingers such as, ‘I’ve come to take back her ears’, and regularly fail to grasp the brevity of the situation with a nonchalant response to immediate threat.

Sure, there’s nothing wrong with the hero showing a complete lack of fear – Garcia Hotspur proved that – but Suda 51’s characters need another level to their personalities if they’re to work, and this feels phoned-in. Gruff-voiced prattle in front of the enemy doesn’t cut it, especially when Mondo’s lines are delivered in the style of Billy the Puppet from Saw.

In the game’s third episode, the shiny assassin travels to a level inspired by Through the Looking Glass and Lewis Carroll’s Alice in Wonderland books. He searches for a small lady whose blue knee-length dress and white pinafore leave nothing to the imagination. Mondo’s female assistant, fresh from screeching that she is happy to be stupid and oppressed under the importance of his ability to violently separate enemies’ heads from their shoulders, plays the role of a ’50s glam-girl who is more likely to shriek in terror than offer valuable help.

Even though Mika can punch Mondo’s chest into action if he succumbs to the strains of battle, her intermittent appearances highlight Suda51’s unwillingness to let players build relationships with each character.These moments underline a title that prioritises quick blasts of stylised action over something more substantial.

Overtures are missed and the player is left without significant feeling towards Mondo or his band of associates. Alice in Wonderland is quickly exchanged for a Tron-styled attack on a mega corporation, then heads to Asia for an Ang Lee-inspired battle against a man who quite literally fights with a Crouching Tiger on his back, whilst discussing a Hidden Dragon.

Killer Is Dead presents a whistle-stop, weightless and random tour of cultural works. Both Mondo’s inescapable robotic nature and the unconnected standalone nature of objectives make this feel like a series of pitches for full games, none of which completely inspire enough to go ahead with. Much like fans of Bond, Tarantino, Carroll and Lee, this simply won’t matter if you partake in an unassuming appreciation for everything Suda51 has to offer. For everyone else, Killer Is Dead offers the chance to peek into the mind of a director who is quickly running out of weighty ideas.