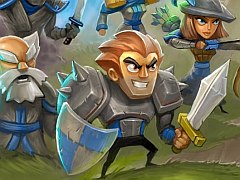 Our honourable mentions are games we feel deserve praise but didn’t make it into our games of the year list. This might be because the game in question wasn’t released in 2012 or simply because only one person felt the game was worthy of consideration. This is our chance to give these games some time in the limelight.

Hey, you! You want to know a secret about 2012? It’s called asynchronous multiplayer and it was the gaming fad that almost happened, but as its champion Draw Something collapsed faster than the Eurozone the most promising way of playing multiplayer games on a mobile device was unceremoniously cast onto the development backburner. Dark times indeed.

Today I am here to talk about Hero Academy, the unsung champion of asynchronous multiplayer by the ex-Ensemble team at Robot Entertainment; a talented bunch of developers who, coincidentally, also make the delightful Orcs Must Die series. Hero Academy was, and is, a rather excellent multiplayer strategy game that goes a little easier on the depth and tactics and quite heavily on having a big old scrap.

This is not the most tactical game in the world, but that doesn’t mean it’s not a tricky game to play well. There’s a claustrophobia to Hero Academy’s compact battlegrounds, and while your success can occasionally feel down to being randomly dealt a good selection of units it certainly doesn’t mean you don’t get a rush of fleeting intellectualism whenever you pull off a particularly canny victory.

That doesn’t mean Hero Academy is stupid, mind you. No no no. I was never particularly good at it, either, but that doesn’t matter either. This is a one-on-one turn-based affair, with you each placing and manoeuvring units on each side of a checkerboard grid. You win by either wiping out the whole enemy force or blasting open their crystals, though doing this effectively in the paltry five moves you’re given each turn feels like an act of indescribable magnitude.

Five moves is key. You can do a lot in five moves – such as start a flank, finish an attack or heal your units – but you can’t do it all. To be precise, you can’t do enough. Hero Academy suckers you into the perpetual feeling that you’re just two additional moves away from complete victory at the end of each go, only for your plans to come undone as soon as your phone buzzes and shows that your competitor has gone and buggered up your best laid plans. It’s the best kind of back and forth, played in intermittent drips over the course of weeks. It’s like that scene in films where the heroic protagonist has been studiously engaged in a game of chess with a wise mentor figure over the course of years, but played on your phone and quite often when you’re on the toilet. I can only begin to imagine how many turns of Hero Academy have been filed whilst players have been simultaneously pooing.

There’s a two-week limit for taking your turn, and I tend to accidentally let a vast majority of my games expire. For all its one-on-one strategy trappings, for some reason it’s never been a game I’ve been particularly encouraged to actually win. I’d argue that doesn’t hurt it, mind – I keep my serious strategy hat for when I’m not fighting the 3G connection on a train, thank you very much. And the brevity of each turn means you’re likely to have multiple games on the go, so you’ll ping-pong across wars on multiple fronts as your brain sits comfortably in come and have a go if you think you’re hard enough mode.

The rhythm that you get into with Hero Academy, then, is one that complements everything else you’re doing on a day-to-day basis. It is not a game designed to entirely engross its audience, but instead dipped into with a sandwich in your other hand while Strictly Come Dancing plays out in the background. It’s not a game that triumphantly stands out in your life, but rather one that excels at blending in.

The game also picked up after its slightly unspectacular launch, when it was a peculiarly bland game of humans versus dark elves. Now Hero Academy has swelled to six factions, including a rather unspectacular late-year addition of the Shaolin. Robot Entertainment has managed, for the most part, to add variety while maintaining a sense of balance, and as you mix the crafty dwarves and aggressive orcs into your chain of active games there’s more than enough to keep your thinky bits ticking over.

The kicker for some is that these additional factions all cost money, and Hero Academy is a game fuelled by microtransactions across the board – even changing the colour of your units costs a bit of cash. This has never really stung me, and all of the Queen’s finest moneypounds I’ve invested feels like it’s been well spent. Because, looking back, Hero Academy has followed me around for the best part of a year. It’s become an old, reliable friend and I’d be sad if it wasn’t there when I needed it.