The second PlayStation virtual-reality headset has been revealed. Well, sort of. We have yet to glimpse the beast itself, but now we have a name. After, presumably, months of careful planning, the machine has been designated “PlayStation VR2” (PS VR2). This is a smart move; invoking the PlayStation 2 is, after all, never a bad thing. Though, as much as I respect Jim Ryan, who took to the stage at the Consumer Electronics Show to tell us about it, why not really invoke the glorious past and get David Lynch back? Lynch directed a string of adverts for the PlayStation 2, and you can imagine him emerging from the curtains, his head encased in the new hardware, with his hair billowing, like stylish steam, from the top. Who better than Lynch to advocate swimming through a private reality, off-limits to the rest of the room?

Along with the name, we got a trove of technical details that make it sound as though your eyeballs were heading to a weekend spa. First, they are bathed in four thousand pixels each, by a pampering OLED display, before being offered the adjustable lens separation, at which point they will feel energised and uplifted by a refresh rate of 90Hz/120Hz. Your hands and head, too, are in for a treat. The “PlayStation VR2 Sense controllers,” as they have been christened, feature the haptic feedback and the selectively stubborn triggers of the PlayStation 5 controller; and the headset boasts a vibration motor, which, according to Sony, “amplifies the sensations of in-game actions from the player.” The examples laid forth include: “a character’s elevated pulse during tense moments, the rush of objects passing close to the character’s head, or the thrust of a vehicle as the character speeds forward.”

Personally, I require no amplified sensations on that front. My trips into V.R. already entail an elevated pulse and the feeling of a thrusting vehicle, along with a light sweat—such is the state of my querulous stomach whenever I play. Still, a slight dose of travel sickness hasn’t kept me away. I have remained a V.R. enthusiast, ever since being given the opportunity, in Blood & Truth, to raise a middle finger to Colin Salmon, as he loomed over me in a London warehouse. To say nothing of Wolfenstein: Cyberpilot, which, set in the French capital, stuffed me into the queasy cockpit of a Panzerhund, a robotic dog with fire dripping from its metal teeth—Paris when it sizzles! 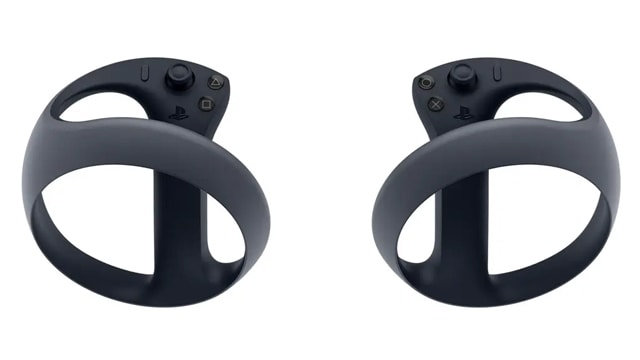 To bolster our excitement for PS VR2, Sony revealed Horizon Call of the Mountain, a V.R. game set in the same tech-infested wilds as the upcoming Horizon Forbidden West. The trailer was brief: a wavering shot of a grinning gentleman, amid some freshly steamed greenery, followed by a fleeting boat-bound segment, in which the camera cranes dizzyingly upward to survey a Tallneck—a vast and loping cross between a giraffe and a satellite dish. In a post on the PlayStation Blog, we are informed that “this story will be told through the eyes of an entirely new character.” Before being told, with a hint of steadying reassurance: “You will also meet Aloy.” Oh, thank Christ. The question is: Is this enough? As much as I was fond of Sony’s first V.R. headset, the fact remains that it was as unwieldy as it was niche. Only five per cent of PlayStation 4 owners bought one, and no wonder; keeping it in your living room meant wrestling coils of writhing wire, like doing battle with one of Poison Ivy’s plants.

Other reasons for PS VR’s modest audience size may include: price (£349 at launch, not counting games, naturally), general interest (the average player, it would seem, prefers not to press his chosen fictions quite so firmly against the bridge of his nose), and quite possibly the notion of resembling one of the Borg, from Star Trek—pale, profusely cabled, and perennially hooked into the cube of one’s living room. With PS VR2, Sony has at least tackled one of those obstacles. Apparently the unit boasts “a simple setup process,” comprising “a single cable connected directly to PS5.” Fair enough. We have no word yet on price, but, considering the technology crammed into PS VR2, I would hazard a guess at it being comfortably above that of the original.

Given that the number of PS5 owners (13.4 million) is a mere fragment of the number of PS4 owners (116.6 million), Sony will need more than an impassioned 5 per cent. Plus, it doesn’t help matters that people have, in many cases, spent on a PS5 not just the asking price of £449 but insanely more, as the console is poached, like a pale Rhinoceros, by scalpers. In short, what will coax the masses, whenever PS VR2 is released—this Christmas, perhaps, or early next year—to open their wallets?

What about the prospect of leaving their wallets ajar? Last month, there were rumblings that Sony is beefing up its subscription services in a bid to even the score with Xbox Game Pass. According to a Bloomberg report, the new service is code-named Spartacus—doubtless, to give it a hint of righteous uprising—and it will see PlayStation Now merging with PlayStation Plus and splitting into three tiers. Might Sony slot some extra V.R. perks into the base tier? Or even include a pool of PS VR2 games with someone’s existing monthly subscription? For those pioneering souls who pony up for one, what about something akin to the PS Plus Collection, which rewarded PS5 owners with a catalogue of exclusive games at no extra cost? With Xbox Game Pass, Microsoft has made it entirely possible for someone to buy an Xbox and never cough up for a game; Sony, while unlikely to fully follow suit, could still greatly cushion the financial blow of buying a PS VR2.

The chances are that the V.R. devoted will hear the call of the new headset no matter how mountainous the price. They are, even now, draping damp flannels over their brows, in monastic preparation for the thrills ahead. The challenge for Sony will be drawing in players from wider pastures. Not everyone will leap at the chance to dip their brains in a 4K fizz of jungle, with motors drumming their temples to the quake of a Tallneck’s footfall. Some folks—God knows why—will need further convincing. Of course, it may turn out that the success of PS VR2 will be secured not by anyone in the offices of PlayStation but, rather, by Mark Zuckerberg. Launching a V.R. headset now means granting people a window into the metaverse—a chilly realm of lacquered aether whose benefits, so far, include the option to pluck bottles of digital red wine from the shelves of a spectral Walmart. So there you have it: Sony can either look to Microsoft and its nifty subscriptions, or count on our collective wish to uncork our minds and go browsing for booze on the sofa. Who knows? Maybe a partnership is on the cards: “Shop at Walmart—You will also meet Aloy!”