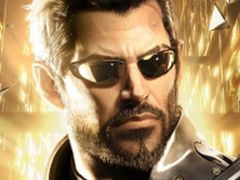 About an hour into Deus Ex: Mankind Divided, Adam Jensen survives a bombing in a Prague train station. Others are not so lucky: given the screams, a general knowledge of how explosions work, and a radical downsizing of the interior decoration, it’s clear he’s one of the few people left alive. Still, as a rule of thumb if you’re going to be exploded, try to do so when Robocop is near, and Jensen duly performs his civic duty, doing his best to help out his fellow survivors. He lifts a hunk of debris off a dying woman, and they share a tender moment as she grasps his mechanical arm before she dies. Jensen, visibly miffed if not quite upset, deploys his sunglasses, which are built into his head. Deal with it, eh?

This level of distance, emotional or otherwise, is one of the main problems with Mankind Divided: things happen around Jensen, if not really to him, making it hard to take seriously the central thrust of its racial allegory, in the early stages at least. The game is, as you may have guessed, about mechanical apartheid, and yet despite being the most augmented of all the augs – who are here seen as Other, as victims of fear and bigotry, condemned by propaganda and persecution thanks to an atrocity committed by their kind, if not by their own volition – Jensen is not really oppressed. He shows the same level of slightly miffed nonchalance to aggressive border guards as he does to his old boss (or his new boss) as he does to dying parents whose children are crying behind him. There is no fear in him, because Jensen doesn’t really exist as subservient or as an Other to the dominant power. He IS the dominant power here, or is at least on his way to being so.

Jensen may pay lip service to the trouble around him: showing his ID at checkpoints, remarking on the level of security and harassment that his supposed peers are suffering. At times, the stopping and searching is disconcerting: when the player is interrupted in games it is usually because they have broken certain rules, which for optimum engagement (and minimum frustration) are often both fair and well-signposted. Early on in Mankind Divided it feels needless, arbitrary, and frustrating.

Which it should, of course. The problem is this feeling generally lasts for however long the scene is playing: closer inspection – and free player control – reveals that the apartheid angle is nothing but set dressing. On the underground, there are two carriages: one for augs, one for naturals. Getting on the latter sees you chastised by security, but little more. You can walk past their checks, and freely go in and out of natural-only security zones in full view of the guards. It doesn’t matter. Nothing happens.

Nothing also happens if you walk around some of these heavily-policed zones with a massive gun out. Given the rise of aug-sponsored (or aug-blamed) terrorism, you’d think this would be a hot button for Prague’s finest, and yet you may as well be strutting around with a giant box of kittens and cash. ‘Naturals’ don’t cower in fear or run: in fact they seem bored, muttering to you to get away from them like you were a charity mugger and not the confirmation of all their fears. Cops threaten to arrest you if you stick a gun in their face, but only if you speak to them first. Even then, they won’t arrest you, because they can’t. Considering that in reality if you’re Othered, whether by race or additional factors, tolerance for any indiscretion both real or (often) imagined is dramatically and sometimes fatally lowered, Deus Ex’s take makes no sense at all.

‘It’s just a game’ is the common answer to all these observations. ‘It wouldn’t be fun’ is another. Maybe. But while it is just a game, it’s also one that deliberately chose to have segregation at the heart of the experience: it is one of the most overtly political AAA games in years. Other games draw real-world inspiration, of course: Call of Duty 4’s middle eastern stages being one of many. But most games – and particularly that one – use it as literal set dressing, ‘cool’ stages for a gunfight. Deus Ex goes for something more, and doesn’t get it.

Later on a curfew is imposed, and police presence amplified, as well as the threat of deadly force. Not that it matters: Jensen still has his sword arms, after all, and isn’t much bothered by anything, really. (How could you be when you can fire bombs out of your own body?) Is there an argument to be made that Jensen is just calmly going about his mission? Of course. But that doesn’t explain why the police and the populace are sometimes so indifferent to his actions, and his (un)natural power also isolates the player from any real threat the world-building seeks to offer.

Perhaps Mankind Divided was a lot more oppressive in its early incarnations, and the pressure of the state forces was lessened slightly because it made you actually feel uneasy, frustrated, powerless. Maybe QA, dev, or someone else thought that players wouldn’t actually enjoy their time with the game.

The problem with that attitudes is that when you take something as dangerous, violent, and poisonous as apartheid as the base of your story then it should be like that: in Deus Ex, it’s far too easy to break the illusion of danger or oppression. Because there is none: you’re only ever a Typhoon strike from redressing the balance. Jensen projects a power which manifests as player indifference, a blacked-out limo of a character gliding through the problems of this world, one who allows the player to look out at the issues around them while also safely protecting them from any real harm.

Interestingly, there is one mode in Mankind Divided where true oppression and fear might actually lurk: on its hardest difficulty, where one bullet kills, where leaving your apartment is dangerous, where everything is on the line: getting killed means you’re really dead. Which, I must say, sounds a lot closer to the ideal Eidos Montreal were going for than the difficulty they tell you to play it on. Sadly, and obviously, this would be utterly unworkable for the mass audience it needs to reach to be profitable. Oh well. It’s only video games.