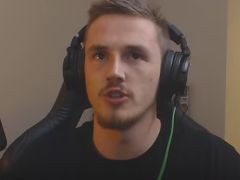 CSGOLotto: TmarTn, Syndicate, and the dark side of YouTube’s cults of personality

It’s a tale as old as time: boy meets internet, boy gets famous, boy uses that fame to promote a gambling site that he owns without disclosing that he owns it. The story of Trevor ‘TmarTn’ Martin and Tom ‘Syndicate’ Cassell is still developing, with intrigues, actors, and motives being established or expanded upon as the days go on. Other YouTubers are either being associated with the scheme, or commenting on it, and the BBC is reporting on the matter, so You Know It’s Serious. It is, you feel, going to be a cautionary tale about the power of greed, money and fame, and the natural lag in regulatory attempts to deal with new media. That YouTube isn’t really all that new is just one issue in play.

A recap, for those not in the loop: our two aforementioned YouTube superstars (who have millions of subscribers between them, and a social media presence and influence best described as ‘galactic’) start up a site called CSGOLotto.com, in which players can bet their Counter-Strike Global Offensive weapon skins against each other. The skins’ worth was, at one point, shown in a dollar amount (although it’s not now), and factors including their rarity dictate their value. In the ‘Duel Arena’ game players can pitch their skins into the pot, a digital coin is flipped (CSGOLotto retains an 8% house edge) and a winner is called. It’s not officially affiliated with Valve, but Steam and CSGO’s systems facilitate the buying and (in-game) trading of skins in the first place. No actual dollars can be withdrawn, but the skins themselves can be ‘sold’ by other means, and can be traded between players for Steam credit.

There’s more to it, but that’s the gist. CSGOLotto isn’t an isolated site: there are others out there seeking to capitalise on the perceived (and, in some cases, actual worth) of these skins. Where TmarTn and Syndicate have come a cropper is that they have been promoting the site they own via their phenomenally successful YouTube channels, variously claiming that they have no direct involvement, and talking up the amount of money they have won on the site, even though, as equity stakeholders, ‘losing’ in the traditional sense was unlikely. This was exposed by YouTube channels HonorTheCall and H3H3Productions, and since then there have been denials, deletions, backtracks, and other statements which only serve at this moment to either confuse or, to some, incriminate.

Looked at from any angle, it’s a colossal fuckshow, regardless of any illegality on behalf of the principals. They may not face legal trouble for their actions, but there are also ethical and moral concerns, not least related to the deception of their audience and the age of some of that audience. Basically, it doesn’t play very well if you’re encouraging kids to gamble, or even seen as pointing them in that direction.

All of that will come out in the wash, of course. TmarTn appears to be taking the brunt of the abuse so far, what with his denials and contradicted statements (and the astonishingly gauche move of showing off his wealth, in a now-deleted vlog, as he did so), but Syndicate is also on shaky ground, having run into issues with the FTC before. Twice.

Whether or not these two individuals find themselves off to the Big House, or losing their big houses, however, seems somewhat like the thin end of the wedge on this one. While the capacity of government for sleeping on the job is obviously massive, there are real issues to be dealt with here: disclosure being one of them, and regulation being the other. Is CSGOLotto ‘proper’ gambling? TmarTn says it’s not. Is he mistaken? Maybe. We’re about to find out.

We’re also going to find out just how much credibility YouTubers really have, not in terms of wider acknowledgment of their activities, but from the source of much of their power (and, in an indirect way, income): their fans. Once painted as the opposite of games journalists, the immediacy of vlogging and the medium was taken as its stars being ‘real’, not relying on a relationship with publishers and the like. Turns out that isn’t the case: who knew that receiving thousands of dollars from a company to promote Microsoft products and not disclosing it, or setting up a betting company and telling your fans to go there and they can win money, was questionable?

Glibness aside, the relationship these YouTubers forge with their audiences is based on intimacy, immediacy, trust, and good old fashioned hero worship. As the reality of monetising this idol status becomes more and more obvious, will we see a change in the YouTuber-fan relationship? Probably not, at least not right now. But something, somewhere, is going to give.