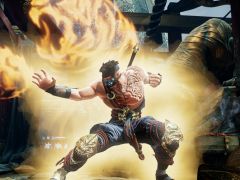 A Killer Let Down

Killer Instinct’s business model, which takes inspiration from the mobile world’s reliance on microtransactions, is the console equivalent of receiving a free, yet tasteless ice cream.

The vanilla version is bundled with a costless cone, but the sprinkles, flake and flavoured source arrive at an extortionate price. Do you want to add any character to your delicious free treat, or does the cheek of such a limited offer make you want to let the tyres down on Microsoft’s promotional van?

That’s a question I will try to answer in the truest fashion possible: by funding extra purchases without the promotional help of the publisher.

As a huge fan of fighting titles, Killer Instinct’s combat system is extremely appealing. Its emphasis on attack rewards those who take the initiative.

Opening a combo is simple, as is performing a chain of weak moves and rounding the sequence off with a super. While repeating the basic manoeuvres is certainly effective, those willing to branch out will find a decent variation of techniques that prioritise breaking your rival’s guard from deep, then capitalising when close.

It’s equally as easy to utilise Shadow attacks, which are governed via one of the HUD’s metres and strengthen character-specific moves, such as Jago’s Endokukens.

Instinct Mode builds upon this and thrusts your battler into a galvanised sense of fury. It also bestows a unique ability. Jago users will see the quiff-haired assassin’s life slowly regenerate, while Glacius gains ‘cool’ armour and Sadira begins firing sticky webs in a bid to halt your offence.

Bouts take place within detailed yet occasionally grainy stages. Although it’s mightily difficult to be wowed by something as generic as a dojo, one particular level launches you into the most beautiful snowstorm console games have produced since that scene in The Last of Us.

Despite these accomplishments, players will soon tire of duking it out as merely Jago, and take the plunge into buying more fighters. I soon encounter Glacius, an alien who is among the title’s catalogue of six currently available characters. With his increased height, gangling arms and ice-sculpture body, I was intrigued to witness how differently he played to Jago, the cast’s only free fighter.

£3.99 later, I wish I had bought a knock-off Red Bull and spent time filling my orifices with the spare change.

It’s not that Glacius is a bad character, or that Killer Instinct is a terrible game. Far from it. It was the immediate realisation that, despite initiating my first transaction, I didn’t actually have much more content to actually enjoy. This is partly down to the fact anything other than Survival, Dojo, Versus and online play will have to be paid for, but also partly down to Killer Instinct’s unfinished state. I had a new character, yes, but not many enough places to use them in. I couldn’t even use the more in-depth of the two training options with them, which is limited to Jago (the knock-on effect is that online players will, in the early stages, all be using similar, basic techniques, stagnating play).

While Microsoft promise an arcade/story mode and plenty of new options to enjoy, all my £3.99 did was tell the company this frustrating financial structure is acceptable. I practically patted them on the back, nodded in appreciation and added an expensive Ice Pop to the free ice cream I devoured earlier. To get to grips with Glacius, I had to buy the character. A huge element of learning a fighting game, and getting the most from it, is playing around with different combatants, learning their strengths and weaknesses.

That’s difficult to do here without putting your hand in your pocket all the time. Even with such seemingly minor sums involved, there’s a sense of injustice when spending to prolong the playing experience of a product that is essentially a demo. Microsoft do a decent job of hiding their open palm – your bouts aren’t interrupted with cries for cash – but it’s troubling to consider how many titles are going to suffer through the microtransaction model across the new generation.

Killer Instinct has the potential to compete with the best fighters out there, its combination of Street Fighter sprites and Mortal Kombat gore the perfect middle ground for players who don’t necessarily want to learn complex sequences to feel powerful.

Picturing it as a fully blown release, something that isn’t likely to occur for some time, it could have significantly aided the Xbox One’s launch line-up with its unique concoction of enthralling one-on-one encounters.

For now, it’s too light to really recommend, and paying for a character you may not like isn’t exactly a sound strategy. Even then, paying for all the combatants as a bundle is still undercut by the sparseness of the modes. Any interest I have in the game has melted away, just like the funds I spent playing it.