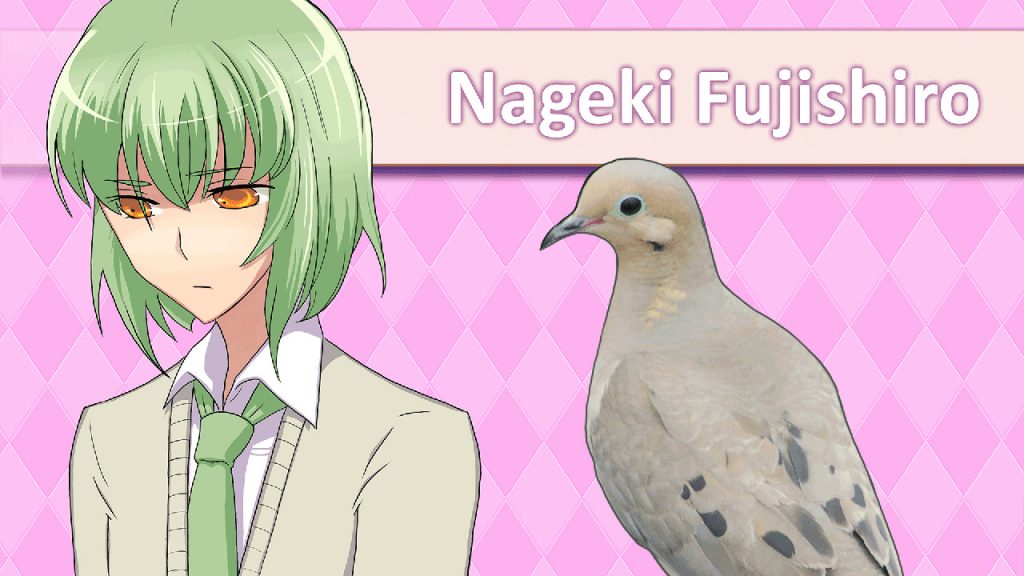 I may be married but I know well how annoying Valentine’s is for everyone. If you are in a relationship you’re supposed to get a card and a teddy for your other half because if you don’t it means you’re a heartless piece of shit regardless of how you behave the rest of the year, so if you want to avoid that you have to come to some sort of agreement with your partner, but you still feel a bit awful because everyone else is posting photos of bouquets of roses on Facebook with captions like ‘Just a quiet Valentine’s with this one, wouldn’t change him for the world!’ If you’re not in a relationship you feel bitter towards everyone else and tell everyone that it’s a load of balls invented by a corporation, which you do believe but at the same time wish you weren’t single and then feel annoyed at yourself for caring.

So let’s do something else instead!

Hatoful Boyfriend is great because you’re a human student at a school for pigeons and all the boys in it are pigeons, and even though they get human avatars of waif-like boys with perfect hair to make you, the human player, more comfortable, they are still pigeons. They are still pigeons that can talk and you are a giant human person, and this is never really addressed or mentioned in the context of building a romantic relationship, only ever in the context of birds having taken over the world and you, the walking meatbag, being the oddity. You have to play Hatoful Boyfriend many times over to see the different romances available and I recommend you do that because all of them will make you go ‘Haha, what?’ and more than one will make you go ‘What… what the FUCK?’

People who have played Hatoful Boyfriend are reading this and nodding sagely at that part with a little smile, because they totally know which bits I’m referring to, but if you haven’t played Hatoful Boyfriend then there is no adequate way to explain how off the rails this game gets and it is already a game where you date high school age pigeons. Even if I did spoil what happens in it you would not believe me. You would think I was making it up to be funny. In conclusion: Hatoful Boyfriend will make you forget whatever else is or is not going on in your life.

Let’s continue the animal theme with Purrfect Date, a game that exists at a healthy cross section of internet interests: romance games, and cats (the name is a pun, you see). You play as a series of six research assistants who come to an island inhabited solely by cats and a handful of variously suspicious members of a study team. One by one, each of these assistants is bitten and begins a process of catification. They use what time they have left as a human to a) synthesise a cure and, more importantly, b) go out with cats from the island, with the chance to pair off with them long term if you have enough successful dates. Purrfect Date is a good way to paper over your troubles because it has a lot of cats and cat puns, both of which are cute as heck. The dates also go better when you are honest and act as yourself, so the game teaches you that you don’t need to change to find love, just like in real life! Unless you’re a horrible person. Then you probably should change.

This game is unrealistic in other ways, though, because obviously in real life cats are the pet that love you for your ability to operate a can opener and no other reason. I once had a cat who disappeared for months. I thought she was dead. Half a year later she came back wearing a collar with a new name on it, meowing at the door and indignant that we’d stopped buying cat food. This Valentine’s Day, be more cat by only displaying affection for as long as you want something. If it works for cats, why not you?

Persona 5 is an RPG where you fight alongside Personas, the external manifestations of the characters’ true selves. Sadly there isn’t a great breadth of romance options on offer in Persona 5, and in that sense you are justified in calling me out for the title of this article, but the key point is that the romances that it does have are bizarre and also require a shocking amount of admin on your part because, like, you can’t ask someone out if you don’t have enough guts, which means going to the library loads or reading certain books on your journey to school, or like you need to take them out to get noodles and stuff – it’s really a massive headache and you might end up abandoning the whole idea. Just like actual relationships, right? You have to go somewhere you’ll both like for dinner and share wardrobe space and go on holidays to places they’ve always wanted to go, and separate your pants from their pants when you do the washing. Not worth it.

In Kitty Powers’ Matchmaker, and the newer Kitty Powers’ Love Life, you’re put in charge of other people dating – matching them up, making sure they have things to talk about, sending them on successful dates, and so on and so forth. Love Life in particular keeps you so busy juggling different schedules that it’s hard to think about anything else. But the other thing about Kitty Powers’ games is that the happiness of other people has been placed in your hands. Think of it like this: you are both Paul Hollywood and Mary Berry, and a perfect choux pastry filled with crÃ¨me pat and with delicate sugarwork decoration has been put on the table in front of you.

The power is yours to create either lasting contentment with one of those weird look-down-place-fists-on-the-table-look-up-with-piercing-blue-gaze-and-half-smile things that Paul does when he’s proper pleased, or to destroy a life by tearing the pastry apart and saying it has a soggy bottom. You can do that to potentially happy couples – like you secretly want to when you see people walking around holding hands and being content in public – but without any real world consequences. Send them to terrible venues! Match people up who will hate the sight of one another! It’s kind of against the spirit of the game, but it might make you feel better if you’re in a bitter mood.

Basically Any BioWare Game Ever

BioWare games are not RPG games, they are complicated dating sims disguised as RPGs, so notionally hardcore players won’t feel embarrassed about being really into them (like how Harry Potter had special edition black and white covers for people who, for some reason, really wanted strangers on their commute to think they were intellectual at first glance, because you can’t be smart and also read a book aimed at children). But it’s okay! Everyone knows what Mass Effect and Dragon Age fans are really interested in. You know it. I know it. BioWare definitely knows it. Throw off the shackles of shame and declare proudly with one voice exactly how many characters you smooched and which you enjoyed smooching the most. Only through loving yourself can you learn to accept the love of others! Specifically, the love of a jolly pansexual cow mountain voiced by Freddie Prinze Jr..