Jump Force is an impressive assault on the optic nerves 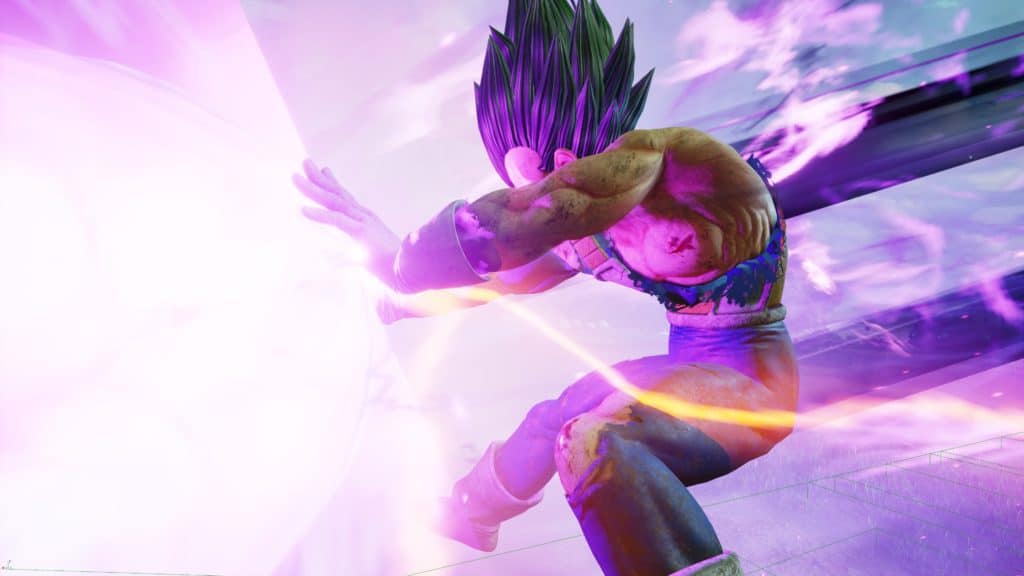 The question that casts scruples over most crossover fighting games is as banal as it is devastating. It is not whether so-and-so makes a triumphant appearance, who has been made mightier than whom, nor whether the whole affair has been suitably buffed with fan-pleasing polish. All of those things are mere embroidery, after all. The question is simply ‘is it any good?’

Well, having played Jump Force for a good while, I can confidently report: I think so. Forgive me. It’s difficult to come away from playing it with one’s thoughts coherent and retinas in tact. For a start, moment-to-moment play had my eyes fluttering around the screen, creating the same sensation in my chest that drinking one too many cups of strong, black coffee does. The mere act of moving is as fevered as a firework – and often carries a similarly pyrotechnic glow.

For fans of Weekly ShÅnen Jump – with its billowing pillars of flame and flamboyant, stylish art – it couldn’t be any other way. Then again, Jump Force is another way, not only bursting from the black and white pages of the manga, but unified under one surreal art style. The real world and the Jump World have merged, so the story goes, by some as-yet-unexplained cataclysm. This means the likes of Goku and Naruto are bound under a banner of soft, matte finished polygons, and framed with familiar backdrops. One bout was backdropped by Times Square, another in the swirling cirrus clouds at the base of the Matterhorn, in Switzerland, and another one on familiar Namek, with its seafoam skies and lurking Capsule Corp. building. It’s strange that, despite the Earthly scenes, I felt more at home on another planet. 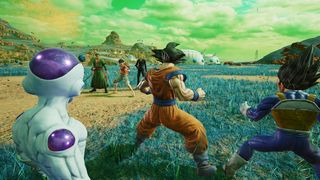 Choosing three warriors from a generous crop, you’ll face off against an opposing troika in a tag team fracas. The roster in the build I played featured Goku, Vegeta, and Frieza, from Dragon Ball Z; Zoro, Luffy, Sanji and Blackbeard, from One Piece; Naruto and Sasuke, from Naruto; Gon and Hisoka, from Hunter X Hunter; and Aizen, Rukia, and Ichigo from Bleach.

With 360-degree movement (not including your flirtations with the air), the camera swoops and gawps to ensure both warriors stay in frame. This means combat carries an elastic twang, as if you’re tethered to your enemy with a bungee cord. It tautens with a tap of the shoulder button, pinging you toward your foe and closing distance fast; and it slackens if you retreat to regroup. If you’re anything like me, you will need a generous dose of that, so frantic are the fights.

Sufficiently pasting your opponent fills a meter that, when activated, grants you a temporary power boost accompanied with a visual supernova. Further phosphorescence comes by way of the four power moves mapped to the D-pad, unleashed by stoking the flames of your Ki energy. Even basic blows, strung into combos with humble fists and feet, arrive like a series of earthquakes, shaking the camera and crumpling your adversary into all manner of acute angles. 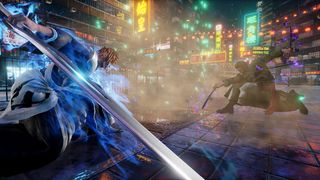 In the midst of the din, I found some of the button inputs imprecise; the desperate scramble to fill my meter or evade the scorching blitz of a Kamehameha lead to some evasive dashes and counter attacks not registering in time. It was all very flustering. To be fair, if I’d had a soothing cup of tea by my side, I would have had time to take a few steadying sips, because large stretches were spent with control surrendered, watching the light show play out. Depending on your affinity with the game’s style and subject matter, it may be a show you thoroughly enjoy. However, if you’re after a tight, responsive fighter, then – at the moment – the jury seems to have been blasted out through a wall with a fireball.