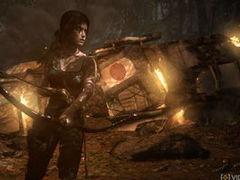 The Xbox One and PlayStation 4 versions of Tomb Raider: Definitive Edition both run at native 1080p and share identical assets, including textures, character models and particles, Square Enix has insisted, responding to speculation that the frame rate may not be the only difference between the two versions.

The speculation appeared online yesterday, after new footage from IGN and Gamersyde seemed to reveal fairly major graphical differences between the two versions, including lower quality textures and missing visual effects, including depth of field, in the Xbox One version.

Some also suggested that the Xbox One version may actually run at a lower native resolution than 1080p, with the footage appearing noticeably softer on Xbox One than PS4.

But Square Enix insists this is not the case.

“Both Xbox One and PS4 gameplay run at native 1080p,” Square Enix said in a statement provided to VideoGamer.com this morning. “The assets from one platform to the other are the same as all source assets were shared 1:1 (textures, models, particles, etc.).”

If that is the case, then, why does the footage appear different? Nobody, it seems, has the answer.

It was revealed last week that Tomb Raider: Definitive Edition runs at 60fps on PS4 and only 30fps on Xbox One. It was also revealed that the two versions were developed by two different studios, with Nixxes handling the PS4 port and United Front Games developing the Xbox One version.