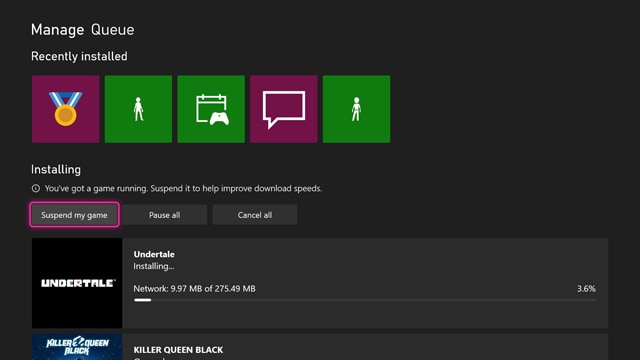 A couple of very useful new features have been announced coming in a future Xbox update that will allow players to potentially increase their download speeds via the Queue section of the Dashboard.

As spotted by Eurogamer, the update—rolling out to Xbox Insiders now before it heads to everyone else later—has a new 'Suspend my game' button appear that will let you suspend a game currently running in order to make your download go faster while still allowing you to use Quick Resume on the same game on Series X|S.

Previously, you would have to fully quit a game to get full speed on your downloads as usually the console reserves some bandwidth for a game's online features while a game is running. Obviously with the Xbox Series X|S' Quick Resume feature, this could prove troublesome; particularly if you have a lot of games on Quick Resume at the same time and are struggling to find which one is causing the throttling.

As well as this new feature, engineering lead Eden Marie also revealed that the next Xbox dashboard update will also offer updates to the Games Library on the dashboard, with new categories particularly in the Xbox Games With Gold and Xbox Game Pass sections, allowing you to more quickly see games that are leaving soon or have recently been added to the service.

There's no exact date for the wider rolling out of this update, but Xbox Insiders should be able to nab this update now through the Xbox Insider Program on their dashboard until it's ready for general launch presumably by next month. March's Xbox update launched just last week and added Auto HDR and FPS Boost toggles.