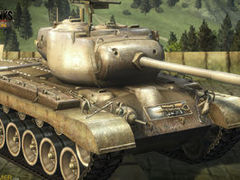 World of Tanks coming to Xbox One next month

World of Tanks launches on Xbox One on July 28, developer Wargaming has announced.

The game will launch with improved visuals and be the first to offer cross-platform play across Xbox 360 and Xbox One. Players looking to get a taste of the game before launch can do so via the beta weekend which runs on July 11 and 12.

World of Tanks will be a free download, but requires an Xbox Live Gold subscription.