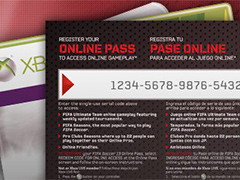 When EA announced plans to drop its Online Pass scheme, the decision was met with a certain sense of scepticism. Why, after pioneering a strategy that would soon become an industry standard, would the company suddenly drop one of its seemingly major revenue streams? On the face of it, the decision didn’t appear to make all that much sense. After all, though the success of Online Pass was never truly discussed by EA, the fact that it was around for so many years (and that it was adopted by so many of EA’s competitors) suggested that it was, at the very least, making some sort of positive impact on the publisher’s revenues.

Nevertheless, the more cynical of us – myself included – speculated whether its cancellation was a sign of things to come. Did the removal of Online Pass pave the way for a more controlling form of player management, and was this an early indicator of the platform holders’ plans for next-gen consoles, where a digital-only future would negate the need for an Online Pass to exist?

For some time, that theory proved to be somewhat correct. When Microsoft revealed Xbox One in the days following EA’s announcement, the reasons behind the removal of Online Pass appeared fairly black and white. Players would now be required to register a title to their account to even access the main menu screen, let alone load up the multiplayer. It meant that EA would no longer need to rely on Online Pass to subsidise its losses from the sale of pre-owned software because, essentially, there wouldn’t be any pre-owned software, just digital licenses which, if the rumours were true, publishers would have profited on from their resale.

That’s no longer the case, of course. But by reversing on its DRM policy, did Microsoft ruin EA’s plans? While possible, it’s far from likely. In fact, Microsoft’s original policies may not have actually had any bearing on EA’s decision to do away with Online Pass whatsoever.

The real reason – beyond EA’s official ‘player feedback’ line – appears to be far more obvious. The multiplayer market is a massively expanding business: Just one glance at the next-gen line-up, with its Destinies, Divisions, Crews and Titanfalls, is enough to tell you that. But thanks to emerging business models, every player playing online – regardless of whether they’ve purchased the title new, second-hand, or are just borrowing from a friend – is a potential customer, rather than an added cost. A second-hand player getting a ‘free ride’ on EA’s servers may come at a small price, but when you consider the amount of money that they could spend through in-game purchases, opening the barriers to all is a low risk with a potentially major pay-off.

We’ve already seen how much of an impact multiplayer add-on sales can have on company revenues. Digital sales accounted for 76 per cent of EA’s $495m FY14 Q1 takings, of which $177m was earned purely through add-on content from services such as FIFA Ultimate Team and Star Wars: The Old Republic. In comparison, just $37m was spent on full game downloads. Sure, it’s a quiet period for major releases, but almost five times as much money is currently being spent on EA’s add-on and micro content than full game digital downloads, and when you take into consideration their relatively low price, that’s a significant number of transactions being made by a terrific amount of people. By opening up that side of the business to even more customers – not just those who bought new or paid the pre-owned tax – EA can only benefit.

And it knows it. The publisher is continuing to experiment with the way it monetises its multiplayer titles. This year, it’s set to introduce ‘Battlepacks’ with Battlefield 4, low cost digital packs designed to be purchased multiple times, and that grant buyers access to exclusive in-game items and bonuses. If successful, it could provide an additional (and possibly quite substantial) revenue stream to the shooter’s traditional expansions. And further monetisation models will continue to be introduced in the years ahead. Just two weeks ago, EA announced plans to continue expanding its efforts in “alternative business models”, which it believes will “continue to grow as the online capabilities of [PlayStation 4 & Xbox One] really manifest themselves”.

Multiplayer, then, is clearly where the money is, and by encouraging add-on sales by offering the business to every type of consumer, EA is opening the floodgates to rake in oodles more cash. But there’s one question that remains unanswered: Just as it did with Online Pass’ introduction, could EA set a trend amongst other publishers by taking it away?

Sony Computer Entertainment has already confirmed plans to drop its Network Pass, stating that the requirement of PlayStation Plus to access multiplayer on PS4 would replace its previous online pass requirements. Codemasters, meanwhile, which has required the use of a VIP Pass to access its games’ multiplayer modes, Racenet functionality and YouTube upload service, told VideoGamer.com that it would be dropping VIP Pass with the launch of F1 2013. “As part of our review of systems we will not be implementing a VIP Pass system in F1 2013 when it releases this October,” a Codemasters representative confirmed to VideoGamer.com. “Players of both F1 2013 and F1 2013: Classic Edition will not be required to activate multiplayer functionality via the VIP Pass code and there are no plans to replace the pass with an alternative or paid-for activation system in the game.”

And others may follow suit. Ubisoft said that though it had nothing to announce regarding Uplay Passport “right now”, it will “continue to focus on providing the best experience for [its] customers no matter how or where they buy [its] games”. Warner Bros. chose not to respond to VideoGamer.com’s request.

The real reason for dropping Online Pass may not have been as sinister as first thought, then, and staring us in the face all along. “We listened to the feedback from players, and decided to do away with Online Pass,” EA says. “We hope that eliminating Online Pass will allow more people to play and enjoy EA games for a long time to come.” And that they’ll all spend a little bit of money along the way, too, no doubt.