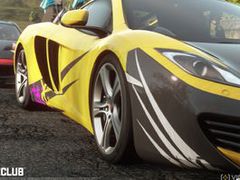 Weather effects may be patched into DriveClub post release

DriveClub may not launch with weather effects, but this doesn’t mean such a feature won’t be added to the title post release, Evolution told Playstationer.net at E3 last month.

“This is actually a question that comes up quite a bit,” said Evolution in an interview featuring Paul Rustchynsky, Alex Perkins and Col Rodgers. “Obviously, what we’re currently focussed on is getting the game perfect and building a community around it first, but if there is a call for weather effects, nothing is currently off the cards at this point.”

The studio continued: “The game that you play day one on PlayStation 4 is not going to be the same game you play a year down the line because it will have evolved a lot. We’re keeping the development architecture of the tracks etc very much open. We’re not closing off anything just yet.”

Time of day simulation is confirmed for launch.

DriveClub will be released day one with the PlayStation 4.

Evolution is targeting 1080p and 60 frames per second, but at E3 was hitting 30fps. It seems sensible to prioritise performance over implementing simulated weather, which could be added down the line.