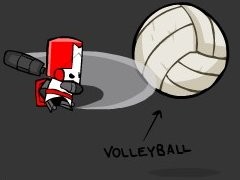 Castle Crashers is one of the stand-out titles on XBLA, and the good news is it’s also on its way to PlayStation 3.

Posting on the official PlayStation Blog, Emil Ayoubkhan from developer The Behemoth has given a quick update on how things are progressing.

“Let’s talk about the release date,” said Ayoubkhan. “This is pretty straightforward actually as we don’t have one yet. We’re looking to finish sometime this year and as soon as we can narrow it down to a specific month, we will be able to talk about this more.”

What Ayoubkhan was able to say more about is a new volleyball mini-game for the PS3 version.

“It’s basically like playing volleyball with your friends but you get to replace good sportsmanship with explosions, magic, and weaponry,” he explained.

There will be local and online play for up to eight players (four per team), the option to play with AI team mates and opponents, and full online leaderboards.

There are even more new features and additions on the way, too, promises Ayoubkhan, details on which will be revealed in the coming months.