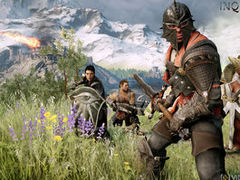 EA has cast doubt over Dragon Age: Inquisition’s autumn 2014 release date, suggesting that though a release next year is “most likely”, there’s a possibility it could slip.

“We were highly conscious of the fact that, if Battlefield is as successful as we believe it’ll be, that that sets ourselves up for a challenge next year,” said EA CFO Blake Jorgensen during the firm’s Q2 2014 financial call last night. “But remember, we’re introducing NBA this year. We’re introducing UFC next year. We have Sims next year, we would most likely, possibly have Dragon Age next year.”

Dragon Age: Inquisition (previously known as Dragon Age 3) has already seen a major delay, having been previously due to launch this autumn. It is currently expected to launch on current-gen consoles, PC, Xbox One and PlayStation 4 late next year.

However, Jorgensen’s comments suggest the firm may not be 100 per cent confident in the revised release date.

EA will reveal “more about our ultimate revenue and plans and title plans when we give guidance later in the year,” Jorgensen adds.