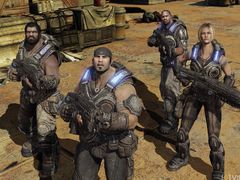 UK Video Game Chart: Gears of War 3 emerges at No.1

Gears of War 3 has entered the All Formats All Prices UK video game chart at No.1, becoming the Xbox 360’s seventh largest launch to date, and the 12th largest individual format launch.

Epic Games and Microsoft’s third game in the series was close to selling as much as the combined launch weeks of Gears of War 1 and 2.

Codemasters’ F1 2011 has to make do with second place, while Deep Silver’s Dead Island continues to prove many critics wrong at No.3. 505 Games’ Zumba Fitness is up seven per cent to No.4 and Deus Ex: Human Revolution holds at No.5.

Elsewhere, THQ’s Space Marine slips from No.2 to No.7 and Sony’s Resistance 3 slides to No.8

9. LEGO PIRATES OF THE CARIBBEAN

Gears of War 3 launched big, but we’re pretty sure EA’s FIFA 12 will show that it’s not only games with guns that can break records. The game earned a very good, 9/10 in our FIFA 12 review, and a massive marketing campaign coupled with huge brand awareness will ensure a massive launch and legs a catwalk model would be jealous of.

Also hitting stores next week are ICO & Shadow Of The Colossus HD plus Child of Eden PS3, Driver: San Francisco on PC and the unusually low key X-Men: Destiny.