Ubisoft made a lot of announcements at Gamescom, some of which you'll be interested in - VideoGamer.com 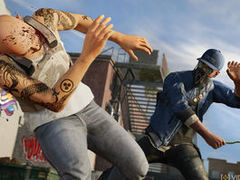 Ubisoft made a lot of announcements at Gamescom, some of which you’ll be interested in

Ubisoft was one of the busiest bees at Gamescom this week, making a host of announcements and pumping out lots of trailers.

Quite honestly we can’t be bothered to give each announcement its own news post, so here’s a round-up of the best that Ubisoft has to offer.

Bounty Hunter promises to enrich the online component of Watch_Dogs 2, which is seamlessly integrated with the single player experience.

The mode is tied to the police heat system and playable by two to four players. When a player creates too much chaos in the open world and is pursued by the police, the conflict may trigger a Bounty Hunter PVP event, pitting the target against up to three rival hunter players who seamlessly join the pursuit and try to neutralise the target. Additionally, players can manually trigger a bounty on themselves using the Contacts app on Marcus’ in-game phone.

For Honor’s multiplayer modes are playable with and against other players or bots in split-screen coop on consoles. These multiplayer modes offer each player a different way to live the fantasy of being a skilled melee warrior on a believable battlefield:

The For Honor Closed Alpha playtest will take place September 15-18 for PC, PS4 and Xbox One. Visit forhonorgame.com to sign up.

Check out the game’s factions in the trailer below.

Extreme sports title Steep will release December 2 for PS4, Xbox One and PC. Check out the brand new trailer below.

The Crew Calling All Units

Racers have been owning the place until today – time to set the record straight! Join the cops and put an end to their supremacy in frantic, high-risk pursuits all over the USA.