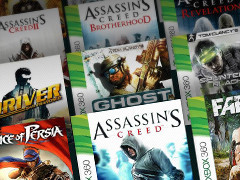 Ubisoft has asked fans which Xbox 360 games they would like to see made backwards compatible with Xbox One, hinting at the prospect of Far Cry 3, Splinter Cell: Blacklist and Assassin’s Creed 2 coming to the new-gen console.

Earlier this summer, Ubisoft’s CEO also suggested that the Splinter Cell franchise could make its way onto the service.

Xbox One backwards compatibility allows Xbox One users to play a range of Xbox 360 games they own on the current-gen console. The service is currently available to test by Xbox One Preview Program members, before rolling out in full in November.

Other backwards compatible titles include Mass Effect, Borderlands and Gears of War.

Latest in the multi award winning series from Ubisoft.

Latest in the multi award winning series from Ubisoft.