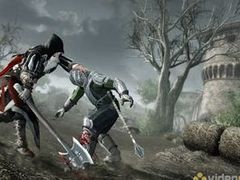 Ubisoft’s much-maligned copy-protection for the PC version of Assassin’s Creed II has caused a catastrophic meltdown, making the game unplayable for thousands over the weekend.

Ubisoft’s new DRM system forces PCs to be connected to the internet in order for games to work – even single-player games.

According to reports, Ubisoft’s DRM servers collapsed over the weekend, making Assassin’s Creed II unplayable for some.

One user affected by the problem, JerfyNL, said: “So I finished the game yesterday, had no problems with the DRM at all, tried to get in today again, and it failed epically, 5 minutes to log in, and when I try to access a save slot, it says connecting and gets stuck, while trying to access Uplay it just says that it can’t connect to Ubi servers.”

Another user, Doctor_Hades, commented: “I was able to play the game fine this morning although I had three quit-to-desktop-with-no-warning sessions yesterday. I’ve tried three times now to resume my save game but I’m stuck at the ‘establishing network connection’ part despite the fact my internet connection is working (I’m posting this, aren’t I). I’ve now been waiting almost 25 minutes to play this game… do UbiSoft think people like waiting around to play their single player games. Worst. DRM. Ever. I will definitely NOT be buying any future games that use this!”

The error has resulted in a spiralling thread on Ubisoft’s official forum, containing posts from angry game owners who have been unable to play the game.

Among the posts are calls from some to download an illegal copy of the game.

“I don’t have any clear information on what the issue is since I’m not in the office, but clearly the extended downtime and lengthy login issues are unacceptable, particularly as I’ve been told these servers are constantly monitored.

“I’ll do what I can to get more information on what the issue is here first thing tomorrow and push for a resolution and assurance this won’t happen in the future. I realise that’s not ideal but there’s only so much I can do on a weekend as I’m not directly involved with the server side of this system.”

In a later post, Vigil suggested the problem was to do with “exceptional demand”.

“Due to exceptional demand, we are currently experiencing difficulties with the Online Service Platform. This does not affect customers who are currently playing, but customers attempting to start a game may experience difficulty in accessing our servers. We are currently working to resolve this issue and apologize for any inconvenience.”

The Assassin’s Creed II PC farce will only add weight to the claim from some that Ubisoft’s DRM policies are draconian and harmful to paying customers.