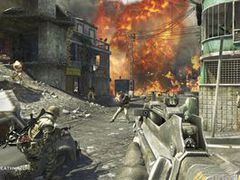 Treyarch: CoD DLC matchmaking ‘to get a lot better’

ORIGINAL STORY: The absence of a dedicated playlist for the Call of Duty: Black Ops map pack, First Strike, is designed to avoid fragmenting the community, according to Treyarch community manager Josh Olin.

But Olin also added that Treyarch was looking into user feedback and that a map pack playlist was something the developer was “willing, maybe, to compromise on.”

Speaking to VideoGamer.com, Olin explained why Treyarch decided against adding a specific playlist with yesterday’s launch of the First Strike DLC.

“Map pack specific playlists create problems because, what they do, is they fragment the community – they fragment the playerbase. That is actually a negative user experience on the rest of the gaming population. However, we understand how excited people are about these new maps and that they want to play them – what we did do, is we weighted them higher. Believe it or not, it is not just run-of-the-mill map rotation.”

Current owners of the First Strike DLC will be placed into lobbies with other owners of the DLC. The downside of this, as detailed by many people on Twitter and the official Call of Duty forums, is that lobbies are simply collapsing whenever an old map is selected.

Still, Olin encourages users to be patient. “I think it’s going to get a lot better as the day progresses,” he said, detailing how the process will be smoother when more people have purchased the new content. “There are still a lot of people buying it every minute,” he added.

Olin was keen to stress the other logistical problems with specific map pack playlists.

“During World at War, we actually did have a map pack playlist. The problem with the map pack playlist was, what sub-playlists do your put in it? Do you mirror every single playlist in the map pack category, or do you just have all the objective modes in a single playlist? We already have 12 or 13 playlists, to then branch 12 or 13 more out inside of the map pack category – that really, really fragments the community, because you’re dealing with a smaller subset of the overall playerbase. It actually creates matchmaking problems.”

He added: “There’s problems on both sides of that fence, and our solution was trying to find the best of both worlds.”

Posting on the Call of Duty forums, Treyarch’s game design director David Vonderhaar echoed that the studio was considering a specific playlist for the new maps.

“We have the option of a First Strike only playlist,” Vonderhaar wrote, “which you won’t be able to join if you don’t have First Strike. We have not yet exercised this option, but are considering adding it on Friday at the start of Double XP weekend based on feedback from the community over the next 48 or 72 hours or so.”

The Double XP Weekend for Call of Duty: Black Ops will run from Friday February 4 to Sunday February 6.