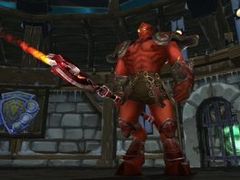 World of Warcraft is changing. Patch 3.2, titled Call of the Crusade, will bring class changes, a whopping new 40 versus 40 battleground, the ability to turn experience gain off and much more. At the Warcraft Regional Finals 2009 tournament at Cologne, Germany last weekend, we sat down for a chat with World of Warcraft game director and MMO legend Tom Chilton to get all the details on the biggest thing to hit wow since Wrath of the Lich King.

VideoGamer.com: The upcoming patch has got a lot of your fans excited. Patches traditionally are fixes, but it doesn’t tend to work like that nowadays. What are your goals with Patch 3.2?

Tom Chilton: I would say our naming scheme for adding new content as a patch is probably not the best possible term! I guess patch is the name we’ve carried through from back when we were developing the game and it holds now. Our philosophy is that each patch should have content for just about everybody, as many players as we can possibly include in content. We’re trying more and more to make sure that each patch has things like 10 man content, 25 person content, five person content, solo player content, because people play in different ways and mixes. I don’t think it’s even true that people tend to be, oh, all I do is blah. Certainly there are people like that but I would say the majority of the players do some raids, heroics and battlegrounds. They do a mix of different things. We want to make sure with all those different combinations of activities people do, any time we do a major content release we’ve given everybody something to do.

VideoGamer.com: With patch 3.2 there’s a new 80 player battleground called Isle of Conquest. Tell me about it.

TC: What we’re trying to do is create another epic-feeling battleground. We haven’t done that since Alterac Valley, other than Wintergrasp, which of course isn’t instanced, so it’s sort of in its own category. Alterac Valley is one of our most popular battlegrounds. We hadn’t done another one like it because they tend to be harder to build and test, especially harder to test. With a battleground like Warsong Gulch, for example to take the other extreme – much easier for us to test. Even within the design team we can get together a 10 versus 10 fight, test it out, quickly iterate on it and then feel pretty confident that it’s going to be good when it gets released. It’s much more difficult for us to do that. We do have the QA manpower but it’s a lot harder to organise. At the same time there’s a strong desire among a lot of players to see more things like Alterac Valley. So we’re trying to take a lot of the best ideas from some of the different battlegrounds, like Alterac Valley and Arathi Basin, and even Wintergrasp with the siege vehicles, and create a new battleground that feels epic and different than the other ones. You’re doing things you don’t always do in any other battleground. There’s getting into a Zeppelin and flying the gunship and shooting the cannons from there and parachuting off into their base and all kinds of mayhem.

VideoGamer.com: It’s 40 on 40. How will you keep it from descending into chaos?

TC: That’s actually part of the charm, is that it will be chaos! One of the things that a lot of players like about Alterac Valley being 40 on 40 is the fact that you don’t have to be the best PvPer in the world to feel like you took part in it. You can get in there with the crowd, take shots at people, have some fun, get some kills and die a little bit too, but you don’t feel singled out and on your own to make or break the battle. Part of what’s cool about Alterac Valley should be cool about Isle of Conquest also. That plus it’s hard to get those large scale battles in WoW or even in other games. It takes a lot to get that many people together and have it feel cohesive.

VideoGamer.com: Is patch 3.2 an attempt to revive PvP in WoW?

TC: I don’t think that it really needs reviving. Certainly our battlegrounds have been going strong. There was definitely a time when there were more people in battlegrounds than there are now, but a lot of that has to do with our reward system. With Burning Crusade there was a while there where you could get best in slot pieces of gear just by grinding out some battlegrounds. It motivated people whether they liked battlegrounds or not, to get in there and get their awesome gear. As we’ve tried to balance the rewards system more, we’re seeing a more natural distribution of players in terms of; they’re doing activities that they want to do rather than doing activities they feel like the game is forcing them to do to get the best stuff. Certainly there are a ton of people doing battlegrounds. PvP is still alive and kicking. I just think we want to add more to it and give players more content. One thing players have struggled with for the last couple of years is that there haven’t been a lot of new battlegrounds added to the game. It’s been a very slow pace of additions. We want to make sure that we take an approach where we can deliver more battlegrounds more often than we did before, just to keep the content fresh.

VideoGamer.com: So there will be more battlegrounds incoming then?

TC: That’s certainly our intent. What we’re doing is we’re trying to improve our tools and infrastructure to make building battlegrounds easier to do. We also want to make sure that the queuing system supports it so players don’t get spread out between so many battlegrounds that we don’t have enough people for any given battleground. There’s work to be done, but it’s definitely in our minds that we want to deliver battlegrounds more often that we did before.

VideoGamer.com: How do you view the arena system in terms of what you intended for it to be and how it’s turned out? Has it been a success?

TC: It’s very successfully doing what we intended it to be, which was a fun side PvP activity. It in some ways went too far in Burning Crusade and started to dominate parts of the game. I say that it went too far because the balance of getting rewards from the arena versus the balance of getting rewards from other parts of the game, wasn’t very balanced. It was driving a lot of people into arenas to get easy stuff when arenas aren’t necessarily for everybody. We want them to be there and it’s pretty cool that we have this relatively hardcore major skill on there and we want to keep supporting it, but we don’t want it to dominate all PvP.

VideoGamer.com: You’re implementing an option to turn off experience gain. Why do that?

TC: Because we wanted to add the ability for players to gain experience in battlegrounds. As the game has evolved a lot of players re-roll new characters and as they re-roll new characters they’ve already been through a lot of the content before and want to do something different. A lot of times what they do is they re-roll a character and they wish they could go through battlegrounds and level up their character that way, because it would feel different than it would through the normal level experience. But we felt like if we were to simply give experience in battlegrounds and let people re-roll characters they would be crushed by a very small hardcore part of the community that create battleground “twinks”, and tend to dominate battlegrounds in these very certain level brackets – 19, 29, 39. We wanted to make sure that didn’t happen. At the same time we’re being told very often by that small community of players that like creating low level twinks, that they’re not interested in crushing these other players that are just trying to level up their characters and don’t have the kind of gear that they have. They want to face off against each other in organised fights. They want to have the ultimate battle of level 19 characters. We wanted to make sure that we supported both of those at the same time. If we added experience gain to battlegrounds without allowing players to disable it somehow then we would almost accidentally destroy that community and that set of players.

VideoGamer.com: Why are you “nerfing” the Death Knight class?

TC: More than anything else we’re just trying to make sure that we balance Death Knights relatively to everybody else. Of course we want Death Knights to feel like an awesome powerful class, just like any other class. People mention the fact that they’re a hero class, but to us what that means is well, they have their own special starting experience – they start at level 55, which is very heroic compared to other characters – but that doesn’t mean that at the end game they’re supposed to be more powerful. We’ve found that there were areas of the game that we felt like they were just too strong, so we’re trying to balance them just like we would any other character class.

VideoGamer.com: Do you have any idea when the patch will go live?

TC: It’s been on the public test realms for a few weeks now. Generally we have our patches up there for a while longer than that. I’m sure there will be several weeks when I get back that we’ll still be on the PTR. Whenever we feel like it’s ready and solid and as free of bugs as we can possibly get it, then we’ll release it.

Patch 3.2 Call of the Crusade will be ready when it’s ready.