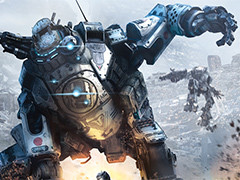 EA has put a tentative Q3/Q4 release window on Mass Effect Andromeda and the sequel to Titanfall, confirming in last night’s investor call that the pair will arrive in the latter half of the publisher’s financial year ending March 31, 2017.

EA CEO Andrew Wilson said of its fiscal 2017 line-up: “We will introduce breakthrough games from some of our biggest and most popular franchises. In Q1, we’ll begin with the creative and innovative Mirror’s Edge Catalyst from DICE launching in May. A great line-up of EA SPORTS titles are in development for next year, and we look forward to sharing more about these new experiences in the months ahead.

“An all-new Battlefield game from DICE will arrive in time for the holidays, we’re excited to have a new Titanfall experience coming from our friends at Respawn and of course, Mass Effect Andromeda from the team at BioWare will launch later in the fiscal year. Players in our live services will continue to experience engaging new content, expansions and updates, and we’ll have more new mobile titles as well.”

Later in the call EA CFO Blake Jorgensen offered a little more info on release timing, for Andromeda, Titanfall 2 and the new Battlefield.

“You should assume that a Battlefield would come typically in the third quarter when we normally have it, said Jorgensen, “we’re not yet announcing when Titanfall or Mass Effect Andromeda will come, but you should assume that’s in the back half of the year as well because our second quarter is so dominated by our sports titles.”

Battlefield 4 launched at the back end of October 2013, so it wouldn’t be a shock to see the new game arrive around that time this year. As for Titanfall and Mass Effect, it sounds like they’ll be in stores between October 2016 and March 2017 providing neither suffers a delay.

Regarding details on the new Titanfall, Jorgensen wasn’t giving much away.

“It’s really early start talking about the details of Titanfall at this juncture and that wasn’t purpose of raising it,” he explained. “What I would say having seen the game is it’s looking fantastic, our relationship with Respawn is extremely strong, we had great fight in that entire team to build a spectacular game and are really looking forward to sharing more details in the months ahead.”