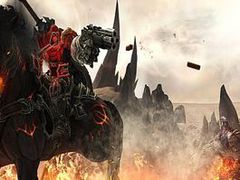 THQ’s Vigil Games isn’t attempting to spruce up the visuals for Darksiders II on Wii U, but does believe the console is more powerful than the PlayStation 3 and Xbox 360.

The studio’s Jay Fitzloff told VideoGamer.com that the Wii U version is “the same” as the PS3 and Xbox 360 versions. “We’re not trying to bump up or bump down,” he said, “but we reached it, and it wasn’t hard. Once we got it up and running it was like ‘cool, there it is.”

Speaking more about the power of the Wii U, Fitzloff added: “We’re still waiting on that final hardware and architecture, and help from Nintendo to figure that out.

“Right now, it looks like it’s more than the 360 or PlayStation 3, but there’s still a question mark about how much you can squeeze out of it. You know how it is, a new system, tricks get learned as the lifespan goes along, so this is where we’re starting, and it looks good.”

Fitzloff was also adamant that work on the Wii U version will not have a negative impact on development of the PlayStation 3 and Xbox 360 versions.

“There was pressure originally as we only got the Wii U development kits about six weeks before E3 and wanted to get it up and running,” explained Fitzloff. “Learning new hardware is the hardest part, it’s uncharted territory. You have a problem with Xbox, you call up, and the answers online – it’s all ready. Whereas this time, you call up after finding a problem, and they’re like ‘wow, we don’t know, let us know if you find an answer!’

“It’s not hurting the other platforms because to get Wii U running we need dedicated heads to think about how we’re going use the Wii U platform to make the game cool.”

Darksiders II is said to put you in the shoes of Death, one of the four horsemen of the apocalypse, who is attempting to redeem his brother War who has been blamed for issuing in the apocalypse in the original game. The game’s set for release in 2012 for Xbox 360, PlayStation 3, PC and at some point Wii U.