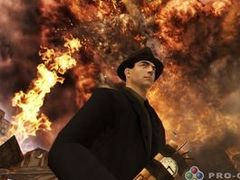 The Godfather II confirmed for February 2009

EA and Paramount Digital Entertainment have today announced that The Godfather II is to be released for Xbox 360, PS3 and PC in February 2009.

The sequel to the 2007 multi-platinum hit goes beyond the film’s story by setting players in the world of organised crime in 1960’s Florida, Cuba and New York. After being promoted by Michael Corleone to Don of New York, players expand to new cities, building up their families through extorting businesses, monopolising illegal crime rings and defeating new families.

The Godfather II introduces ‘The Don’s View’, a new meta-game that allows players to oversee the entire world as they grow the family business. Players will be able to use this mode to build, defend and expand their crime rings, while keeping an eye on the movements and plans of rival families. It will also be key to master the business of organised crime, with players needing to build a family of Made Men, hire crew, hand out orders and promote their best men up the ranks.

The first game’s Blackhand control scheme returns and promises to deliver even more visceral hand-to-hand combat, with the introduction of a new combo system, pressure tactics and executions. Players will also fight alongside their hand-picked crew, who have their own skills and expertise. Each family member specialises in a specific field, including demolitions, arson, engineering and first-aid.

Look out for a first-look preview on VideoGamer.com next week.