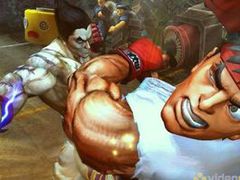 Talking to GameSpot, Harada explained that this year’s launch of Street Fighter V and the upcoming release of Tekken 7 had made it difficult for Namco to find “a good window” to release the crossover, leading to the game being taken out of active development.

“When we develop fighting games, we try to keep the core community in mind as well as the wider audience that wants to play these games,” he said. “But currently the situation is with fighting games, you have Street Fighter V that just released–a lot of people are playing that fervently–and there’s a large crowd out there waiting or Tekken 7.”

He continued: “We don’t want to split these communities, so a good window in which to release Tekken x Street Fighter is something that’s become difficult recently. So it’s on hold for the moment.”

Harada says that development on Tekken X Street Fighter had started, however, with work on the “models, moves and systems” already said to have been finished.

Tekken 7 is currently in development for PS4 with other platforms yet to be announced.