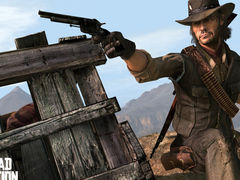 Take-Two Interactive will be at E3 “in a big way”, CEO Strauss Zelnick has teased.

The boss of the entertainment giant, which owns Borderlands-publisher 2K Games and GTA-publisher Rockstar Games, chose not to reveal what it intends to announce at this year’s show, but teased the company’s presence in the latest issue of MCV, stating: “We will be there in a big way”.

Take-Two’s currently announced line-up includes just three games: Civilization Revolution 2 Plus, Battleborn and Mafia 3, all of which are due for release later this year. A new Borderlands title is in development at Gearbox, too (although it has yet to be formally revealed), while rumours persist of a remastered BioShock collection for PS4 & Xbox One.

But could we see even more revealed at E3? A sequel to Red Dead Redemption, perhaps, or some single-player DLC for GTA V?

Rival publisher EA, meanwhile, has previously confirmed that it intends to sit out this year’s show, instead hosting its own ‘EA Play’ event in London and Los Angeles.

E3 begins on June 14, with conferences from EA, Ubisoft, Square Enix, Sony, Microsoft, Bethesda and Nintendo expected to take place in the days before.