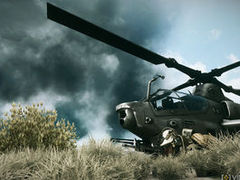 The most recent update for Battlefield 3 has made it possible to play the PC version in Stereoscopic 3D on supported hardware, which EA claims “lets you experience the battlefield with added depth perception”.

EA’s David McDonagh explained how Stereoscopic 3D has been implemented in Battlefield 3.

“We have added support for Stereoscopic 3D in the Frostbite 2 engine by rendering each frame twice (once for each eye). This gives us full control of how our game looks in 3D, and lets us create an even more visceral experience for the player.”

3D is supported by both Nvidia 3D Vision and AMD HD3D.

Enable HD3D by starting Battlefield 3 and go into the options menu. In the video options tab, change STEREOSCOPIC 3D to ON. Adjust the depth using the slider in the menu.